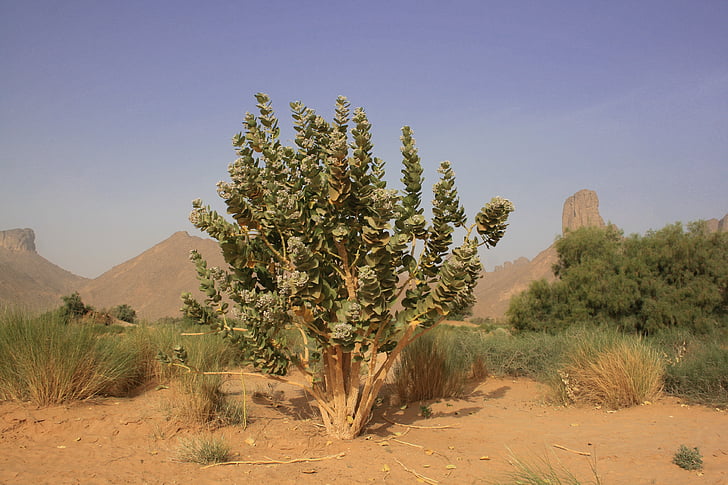 The project called the Great Green Wall began in 2007 with a vision for the trees to extend like a belt across the vast Sahel region, from Senegal in the west to Djibouti in the east, by 2030. But as temperatures rose and rainfall diminished, millions of the planted trees died.

Efforts to rein in the desert continues in Senegal on a smaller scale. On the western end of the planned wall, Ibrahima Fall walks under the cool shade of dozens of lime trees, watering them with a hose as yellow chicks scurry around his feet. Just beyond the green orchard and a village is a desolate, arid landscape.

The citrus crop provides a haven from the heat and sand that surround it. Outside the low village walls, winds whip sand into the air, inviting desertification, a process that wrings the life out of fertile soil and changes it into desert, often because of drought or deforestation.

Only 4% of the Great Green Wall’s original goal has been met, and an estimated $43 billion would be needed to achieve the rest. With prospects for completing the barrier on time dim, organizers have shifted their focus from planting a wall of trees to trying a mosaic of smaller, more durable projects to stop desertification, including community-based efforts designed to improve lives and help the most vulnerable agriculture.

“The project that doesn’t involve the community is doomed to failure,” says Diegane Ndiaye, who is part of a group known as SOS Sahel, which has helped with planting programs in Senegal and other countries across the Sahel, a broad geographic zone between the Sahara in the north and the more temperate African savanna to the south.

The programs focus on restoring the environment and reviving economic activity in Sahel villages, Ndiaye said.

With the loss of rainfall and the advance of the desert, “this strip of the Sahel is a very vulnerable area to climate change,” he said. “So we should have projects that are likely to rebuild the environment … fix the dunes and also help protect the vegetable-growing area.”

On Senegal’s Atlantic Coast, filao trees stretch in a band from Dakar up to the northern city of St. Louis, forming a curtain that protects the beginning of Green Wall region, which also grows more than 80% of Senegal’s vegetables. The sky-reaching branches tame the winds tearing in from the ocean.

This reforestation project started in the 1970s, but many trees were cut down for wood, and work to replant them has been more recent. More trees are also planted in front of dunes near the water in an effort to protect the dunes and keep them from moving.

“We have had a lot of reforestation programs that today have not yielded much because it is often done with great fanfare” and not with good planning, Ndiaye said.

Fall, the 75-year-old chief of his village, planted the citrus orchard in 2016, putting the trees near a water source on his land. His is one of 800 small orchards in six communes of a town called Kebemer.

“We once planted peanuts and that wasn’t enough,” he said in the local Wolof language. “This orchard brings income that allows me to take care of my family.” He said he can produce 20 to 40 kilos of limes per week during peak season.

Enriched by the trees, the soil has also grown tomatoes and onions.

The village has used profits from the orchard to replace straw homes with cement brick structures and to buy more sheep, goats and chickens. It also added a solar panel to help pump water from a communal well, sparing villagers from having to pay more for water in the desert.

African Development Bank President Akinwumi A. Adesina spoke about the importance of stopping desertification in the Sahel during the United Nations’ COP26 global climate conference. He announced a commitment from the bank to mobilize $6.5 billion toward the Great Green Wall by 2025.

The newest projects in Senegal are circular gardens known in the Wolof language as “tolou keur.” They feature a variety of trees that are planted strategically so that the larger ones protect the more vulnerable.

The gardens’ curving rows hold moringa, sage, papaya and mango trees that are resistant to dry climates. They are planted so their roots grow inward to improve water retention in the plot.

Senegal has 20 total circular gardens, each one adapted to the soil, culture and needs of individual communities so they can grow much of what they need. Early indications are that they are thriving in the Great Green Wall region. Solar energy helps provide electricity for irrigation.

“The desert is encroaching. You see it really moving south,” Pershing said.

In terms of the Great Green Wall project, he said, “I don’t think that very many people thought it was going to go very far,” including himself. But there are indications of progress, as seen in the community projects.

“It has a global benefit, and people are prepared to make those kinds of long-term investments through their children and their families, which I think is a hallmark of what we need to do in other climate arenas.”