With a gross floor area of nearly 400,000 square meters, or 56 standard football pitches, Beijing Fengtai Railway Station has 32 rail tracks and 32 platforms and is able to accommodate a maximum of 14,000 passengers per hour.

Located in southern Beijing’s Fengtai District, the time-honored station was built in 1895 and used to provide both passenger and freight services until its closure in 2010. Reconstruction of the station kicked off in 2018.

In addition to accommodation expansion, the station has a new look with many traditional Chinese architecture designs. 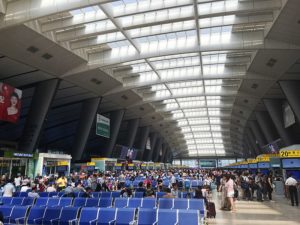 It is also the country’s first railway station featuring a double-deck structure that serves both high-speed and regular train services. There is also a metro station under the railway station, enabling convenient transfers.