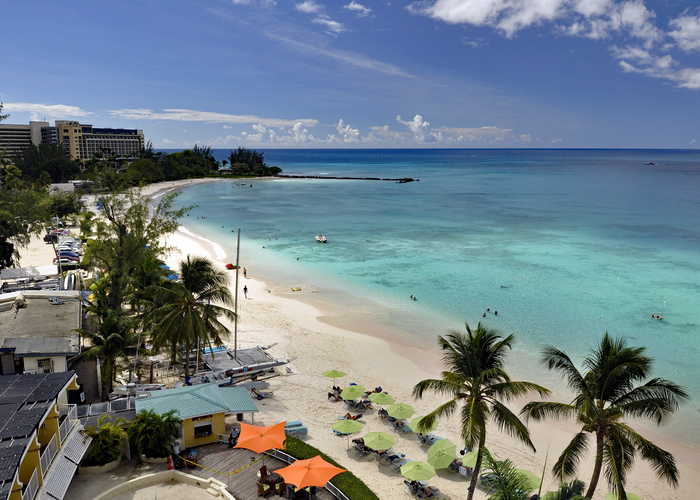 Almost 400 years after the first English ship arrived on its golden shores, the former British colony of Barbados woke up Tuesday as a republic.

The tiny Caribbean nation removed Queen Elizabeth II as its head of state in a spectacular ceremony that began late Monday, breaking its ties with the British royal family — and with it, one of the island’s last remaining imperial bonds to the United Kingdom.

The event was held 55 years to the day since Barbados gained full independence but kept the monarch in the ceremonial role.

At the strike of midnight local time, the new republic was born to the cheers of local crowds. The moment was marked by a 21-gun salute and the playing of the Barbadian national anthem.

A dazzling display of fireworks, dance and music was followed by Prime Minister Mia Mottley declaring the singer Rihanna — a Barbadian native, as well as a global star — a national hero.

Sandra Mason, a Barbadian who had served as the island’s governor general — or queen’s representative — was sworn in as the country’s first president. She was elected to the figurehead post by Parliament last month, but Mottley will continue to run the country.

“It is a monumental step,” Kristina Hinds, a senior lecturer in political science at the University of the West Indies in eastern Barbados, said on a Zoom call from her home in Wanstead, north of the capital, Bridgetown ahead of the ceremony. “I think it is part of the evolution of our independence, and it is certainly long overdue.”

Prince Charles, the heir to the British throne, was in attendance as Barbados celebrated ending its formal links with his 95-year-old mother. Elizabeth is queen of 15 other realms including the United Kingdom, Australia, Canada and Jamaica.

Charles gave a speech saying the creation of the republic “offers a new beginning,” while his mother sent the island her “warmest good wishes” in a statement.

“From the darkest days of our past and the appalling atrocity of slavery which forever stains our history, people of this island forged their path with extraordinary fortitude,” he said

His presence may signal the royal family’s desire to maintain strong bonds with the island, which will remain in the Commonwealth — a voluntary association of 54 states that includes many former British colonies and which the queen has championed throughout her life.

But to Hinds, Charles’ presence is symbolically “a bit odd.”

“It’s problematic for those among us who believe that the British monarchy, as important as it has been for Barbados historically in positive ways, has also caused serious harm to the country,” she said.

In the 17th century, Barbados was claimed by the British and turned into a lucrative colony using the labor of hundreds of thousands of people brought over as slaves from Africa.

It became a major hub for the production of sugar, an increasingly crucial commodity that helped enrich British slave owners.

“A result of the desire for the production of sugar, which was catering for a growing sweet tooth back in England — white consumer lifestyles built on the back of black exploitation and slave labor,” said Christopher Prior, associate professor in colonial and postcolonial history at U.K.’s University of Southampton.

The island’s present day population of about 287,000 is comprised mostly of the descendants of people brought over as slaves from Africa to work in the plantations.

Despite this history, there remains a level of respect for the monarchy and Britain in general, especially among the island’s older population, Hinds said.

Many places in Barbados are named after the queen or her ancestors, and a lion’s share of the country’s tourists come from the U.K., she added. The island is often referred to as “little England.”

“For Barbadians, this is not something personal against the queen, it is about our national pride and governance,” René Holder-McClean-Ramirez, 45, an LGBTQ community advocate and consultant, said on the phone from his home in Bridgetown.

“As we grow and develop as an independent nation, having a foreign head of state just is not necessary or practical,” he said.

For Ronnie Yearwood, an attorney from Bridgetown, the positive feeling of the move is combined with regret that the government pushed ahead without consulting the public on the type of republic they would want.

Barbados first pursued the idea of republicanism in the late 1970s and in 2008 proposed to hold a referendum on the issue, but the date was pushed back indefinitely.

The decision to remove the queen as head of state was announced in 2020 but with little consultation about the transition, Yearwood said.

“There is a lot of disappointment,” Yearwood, 42, said. “It could have been a beautiful moment for all Barbadians.”

Barbados’ decision to ditch the queen follows a wave of protests across the world inspired by the Black Lives Matter movement in the United States. A more forthright evaluation of Britain’s imperial past has helped drive an effort to bring down symbols of racism and colonialism from Cambridge to the Caribbean.

“It’s a local manifestation of a very global conversation that’s being had about the legacy of the British empire and its colonial exploitation,” Prior said.

“Barbados’ move is another element of our decolonizing moments.”

So could the change stirring on the beaches of Barbados mark the start of a wave of realms cutting ties with the royal family?

“When the queen eventually passes away, there is going to be an emergence of further conversations, particularly in places like Australia, about whether they want to have Charles as their head of state,” Prior said.

“I don’t want to suggest there’s any inevitability, but I think it’s extremely likely that the issue of republicanism is not going to be going away anytime soon.”

According to nbcnews.com. Source of photo: internet