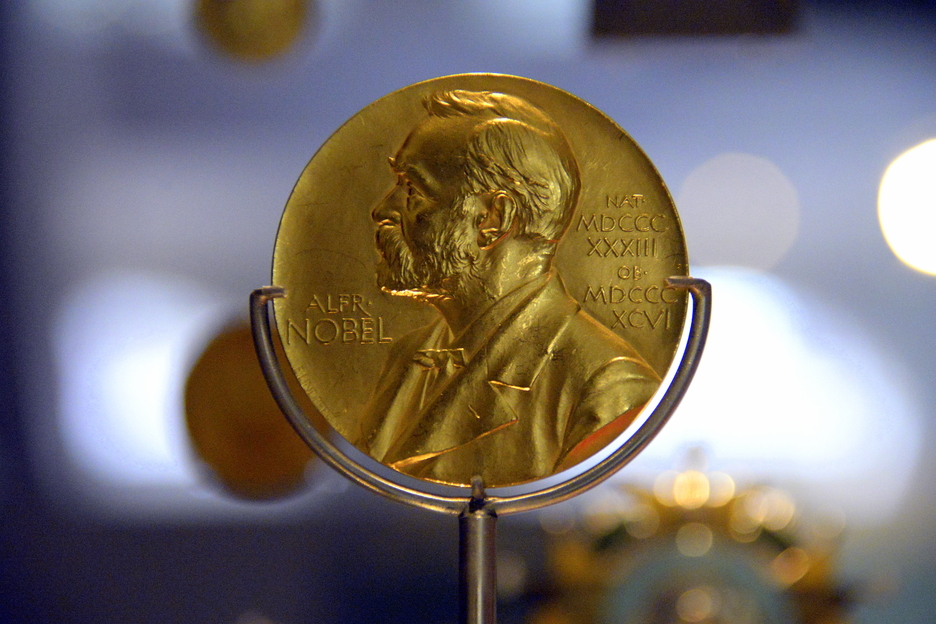 The Royal Swedish Academy of Sciences announced that Sharpless, 81, will share this year’s Nobel with Carolyn Bertozzi of Stanford University and Morten Meldal of the University of Copenhagen, Denmark, for their work in so-called “click chemistry.”

Sharpless received the news from Stockholm at his home in La Jolla long before the sun peeked above the horizon.

“I’m pretty cheeky about thinking my ideas are good ideas,” Sharpless said in a statement, responding to the news. “It’s how I keep myself motivated when everyone thinks I’m crazy.

“I thought click chemistry was a good idea, and probably good enough to be worthy of a Nobel Prize. But winning for a second time is absolutely thrilling, and it’s so gratifying that it’s happening in my lifetime. I’ve always been lucky, but right now I think I’m the luckiest person.”

At that moment, Sharpless became only the fifth person in history to win a Nobel twice. He shared the prize in 2001 for related work that has proved useful in everything from creating medications to new materials. Only one other person — the late British scientist Frederick Sanger — has twice won the Nobel in chemistry. This is also the second time in as many years that Scripps Research — which has helped create such key drugs as Surfaxin and Zeposia — has seen one of its scientists win a Nobel. Last year, Ardem Patapoutian won the prize in physiology or medicine for helping to discover cell receptors that enable people to sense heat, cold, pain, touch and sound.

Wednesday’s news reflects California’s continuing dominance in the field. Over the past 20 years, 13 Californians have shared the Nobel in chemistry. Sharpless’ achievements burnish San Diego’s standing as a world leader in the life sciences and biotech.

The Nobel Committee said that Sharpless, Bertozzi and Meldal “laid the foundation for a functional form of chemistry — click chemistry — in which molecular building blocks snap together quickly and efficiently.

The committee added that “Bertozzi has taken click chemistry to a new dimension” and started using it in living organisms.

She is only the eighth woman to win a Nobel since the prizes were first awarded in 1901. Bertozzi is being honored for expanding on the work of Sharpless and Meldal by creating bioorthogonal chemistry, which enables scientists to change and to map molecules inside cells. The technique could prove useful in fighting cancer, the second leading cause of death in the US.

Sharpless’ latest Nobel arose from his efforts to simplify the process of creating molecules. He wanted to move away from the traditional method, which is tied to replicating the behavior of natural molecules

The older method did lead to generations of pharmaceutical drugs. But it can be a very expensive, difficult and time-consuming process that often produces unwanted products that have to be carefully removed.

In 2001, Sharpless published a landmark journal article that pointed to a possible way to do things better and more quickly. It involved a comparatively inexpensive, streamlined process for snapping simple molecules together to create other types of molecules, particularly those meant to prevent and treat disease.

Sharpless “frequently contemplated his science during long walks or runs along the Torrey Pines Mesa, the Pacific Ocean horizon by his side,” Scripps Research said in company magazine in 2019.

“In his mind … he would turn over the three-dimensional shapes of various molecules, pondering how the molecules of life assembled and behaved. In the same way, he had once gazed at interesting sea creatures during childhood fishing outings.”

Sharpless dubbed the method “click chemistry” and joined Bertozzi, Meldal and other scientists around the world in turning the idea into reality.

Johan Aqvist, chair of the Nobel’s chemistry committee, told journalists Wednesday, “Click chemistry is almost like it sounds. It’s all about snapping molecules together. Imagine that you could attach small chemical buckles to different types of building blocks. Then you could link these buckles together and produce molecules of greater complexity and variation.

Sharpless marveled at the process that led to the advance, telling journalists Wednesday, “One of the things that is most dramatic about humans is that we’re so impressed by ourselves and we have so many things we think we can do.

“It’s a miracle we can do anything in (the) chemistry world. The molecules we need to manipulate are the size of a grain of sand. My hands are the size of a small Earth or a small moon,” he said. “We’re trying to do something that doesn’t make any sense.”

The breakthrough built on Sharpless’ earlier advances in synthesizing chemicals. He shared the 2001 Nobel in chemistry with William S. Knowles, who had worked at the agricultural corporation Monsanto, and Ryoji Noyori of Nagoya University in Japan.

“(Sharpless) has had a tremendous impact on chemistry, first with his development of asymmetric synthesis and now with his elegant click chemistry,” Scripps Research President Peter Schultz told the Union-Tribune early Wednesday.

“His work opened whole new scientific frontiers that have had a major impact on the fields of chemistry, biology, and medicine,” he added. “Barry has a remarkable combination of chemical insight, uncanny intuition, and real-world practicality — he is a chemist’s chemist and a wonderful colleague.”

Sharpless was born on April 28, 1941, in Philadelphia, where his early years were devoted to his two great loves, fishing and boating.

“While I had an overwhelming passion for fishing, school I merely enjoyed and I never planned to be a scientist,” he told the Nobel Committee for an official biography. “In fact, passion, not planning, is the engine driving all my thought and action. The almost unimaginably good fortune of my youth was that other people made such very, very good plans and choices for me …

“I was a pre-medical student solely because my parents always hoped that I’d become an MD like my father. Pre-meds majored in chemistry or biology, and between the two I leaned toward chemistry. I didn’t get really interested, however, until I had two semesters of organic my sophomore year from a young chemistry professor who chose me to do research in his lab.”

He went on to earn a bachelor’s degree at Dartmouth College, then a doctorate in organic chemistry from Stanford University. Sharpless later spent many years on the faculty at the Massachusetts Institute of Technology and, for a shorter period, at Stanford.

In 1990, he moved to the Scripps Research Institute, which today is simply known as Scripps Research. The private biomedical research center has long been a bastion for talent. Over the years it has been home to such figures as Kurt Wuthrich, Bruce Beutler and Gerald Edelman, all of whom won a Nobel Prize.

Sharpless put his life into perspective in the Nobel Committee biography, saying, in part:

“My most important award, the greatest honor I’ve ever received, and the grandest and most memorable occasions I’ve ever witnessed, are, of course, benefits of sharing the 2001 Nobel Prize in Chemistry. But other honors have peerless characteristics as well, notably:

“The heaviest object in our bank deposit box is the 1995 King Faisal Prize for Science medal; the most beautiful one is the 1988 Prelog Medal from the Swiss Federal Institute of Technology (ETH). Its exquisite relief rendering of Old Vlado’s profile rivals the most beautiful portraits found on coins from antiquity, and the gold has a gorgeous, pliant, velvety warmth that has to be seen to be believed (by appointment only). A friend once asked, quite appropriately, if the portrait was of Alexander the Great.

“Three unique objects, and I treasure each one, celebrate the day in 1995 when I received an honorary doctorate from Stockholm’s Royal Institute of Technology. My only top hat, frequently brought out for guests to admire, bears the Institute’s seal; my only ring, always admired when I wear it, is a heavy gold band surrounded by a garland of leaves and acorns in deep relief. These two I share with all the Institute’s doctoral recipients, but I also have a large brass cannon shell casing, fired during the cannon salute that accompanied the conferring of the degree and the ceremonial placing of the hat on my head. The shell sits on my desk at home.”

Sharpless added in a Zoom interview with journalists Wednesday that, “Prizes don’t change me at all, and they don’t help me make more money either … Prizes aren’t what I’m doing science for. I have to do it. It is kind of a compulsion.”

Actually, he will benefit from winning the Nobel.

The Nobel in chemistry comes with a roughly $900,000 prize that will be split between Sharpless, Bertozzi and Meldal

Following tradition, this year’s Nobel prizes in physics, chemistry, physiology or medicine and literature will be awarded on Dec. 10 in Stockholm, Sweden. The Nobel Peace Prize will be conferred on the same date in Oslo, Norway.

According to sandiegouniontribune.com. Source of photos: internet