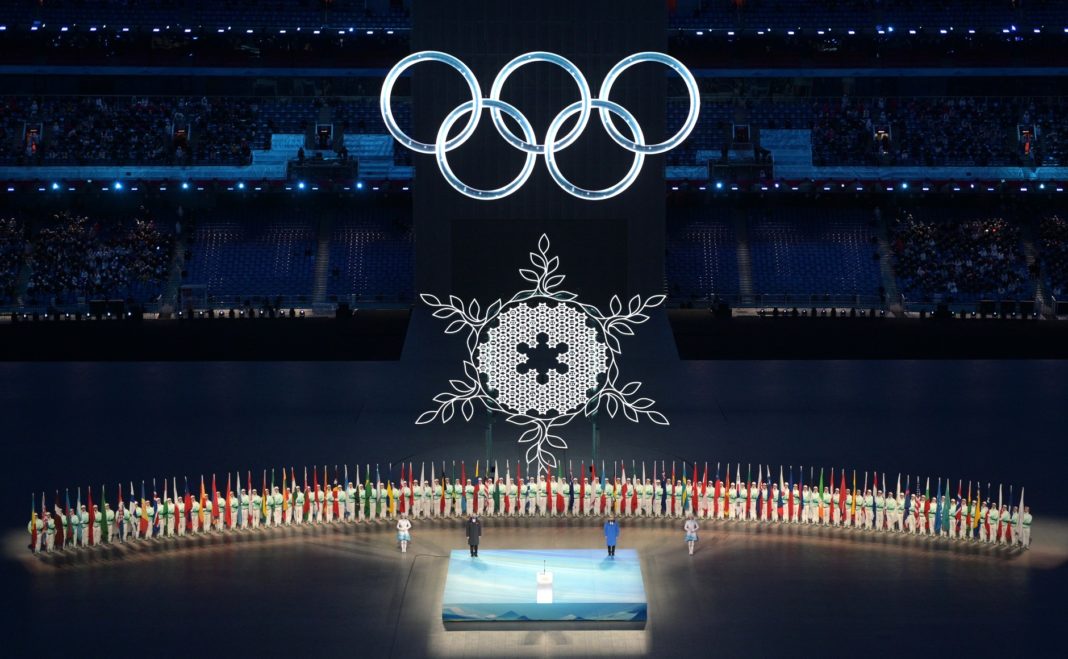 The booth, an innovative cloud-based technology that uses true-to-life reality, is available both outside and within the closed-loop of Beijing 2022 official venues, allowing participants and fans to experience mixed reality social interactions.

Backed by the low latency, high availability and high concurrency features of Alibaba Cloud, the live recording can be projected onto a remote 4K high-definition screen, generating a true-to-life hologram effect, reconstructing all details in high definition — including micro facial expressions and clothing texture — where are essential to in-person interaction, according to an introduction on the IOC website.

“We decided about two years ago that instead of huge crowds, we were going to rely more on modern digital technologies and their chemistry with performers,” said Chang Yu, director of the opening and closing ceremonies department of the Beijing 2022 organizing committee.

In the context of 5G, artificial intelligence and the Internet of Things, the national stadium — known as the “Bird’s Nest” — has undergone an intelligent transformation to host the opening and closing ceremonies. For example, digital technology has been used in equipment operation, energy management and environmental quality control, providing favorable conditions for the ceremonies.

“Inside the Bird’s Nest, we’ve built digital workstations and rendering workshops for instant visual-effect generation, completely upgrading it from a traditional building to a smart stadium,” Chang said.

Instead of traditional projections, the entire floor of the Bird’s Nest is fully equipped with high-definition LED technology, with 16K picture quality, according to Wang Zhi’ou, visual-effects director. Meanwhile, the audience experienced the comprehensive application of AI, AR, glass-free 3D and other technologies.

Actors’ movements can be captured in real-time through the screens on the floor, so as to realize the interaction between actors and screens, according to Zhang Yimou, chief director of the ceremony. “We actually talked about this technology for the 2008 opening ceremony, but it was not possible at the time.”

During the “peace dove” segment, no matter where the child performers ran, the snow at their feet followed, creating a strong appeal to viewers. Chang said that this was not a pre-designed snow effect, but the use of real-time capture, rendering and playback.

“It’s not the latest technology. But it is very rare to achieve such a large-scale application in such a large live square performance,” Chang said.

More importantly, cutting-edge technologies have been widely applied to venues and events.

For the first time in Olympic history, carbon dioxide refrigerants have been introduced to make the “fastest” ice ever; weather forecasting radar equipment and weather tracking stations have been set up in the two mountain areas of Yanqing and Zhangjiakou, forming a meteorological monitoring network to achieve accurate weather forecasting at the level of minutes in time dimension and 100 meters in spatial dimension, and the Olympic broadcasting service is 5G-based.

Eleven of the venues are being reused from the Olympic Games in 2008 in a bid to cut emissions, reduce environmental impact, and minimise the consumption of water, energy and materials.

All competition venues are powered by 100-percent green electricity, and clean energy vehicles account for 80 percent of the total vehicles used during the games.

Zhangjiakou has put into use 655 hydrogen-fueled vehicles for transportation and logistics support services during the games. A hydrogen-fueled vehicle can be refueled quickly, and realize a low temperature start of minus-30-degrees Celsius. Each vehicle traveling 10,000 km can reduce carbon dioxide emission by about 11.8 tons.

According to globaltimes.cn and global.chinadaily.com.cn