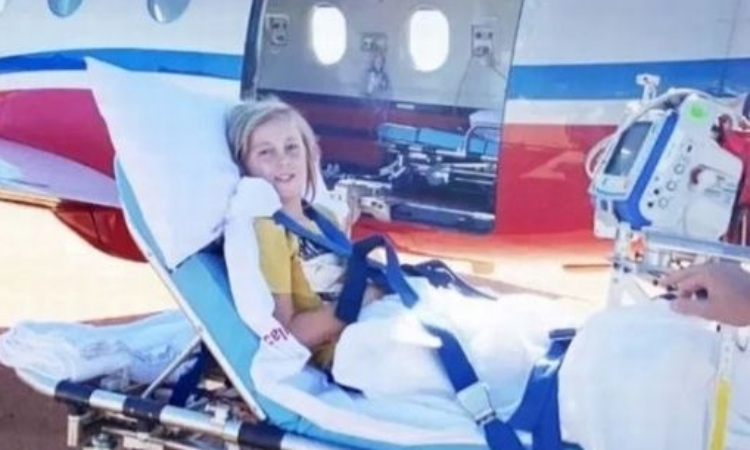 Jackson Bartlett was snorkeling with his dad at Five Finger Reef, near Coral Bay, in Western Australia when suddenly a “shadow” followed him in the water.

“It went for me, missed,” the 10-year told 9News from his hospital bed.

“I was bleeding at (that) moment… I thought I was going to die because it was really scary,” he said.

The schoolboy’s dad Blake Bartlett had to fend off the bronze whaler with his speargun to ensure the shark didn’t attack his son again, reported The West Australian.

He then rushed the injured boy to the shore and said it felt like a “lifetime.”

“We were out probably 75 meters, so it was a long way, and felt like a lifetime,” he told the outlet.

The beach, about 683 miles north of Perth, remains closed to swimmers because of continued shark activity in the popular location.

It’s the second such attack in several months.

Warwick ‘Wokka’ Coles, 48, a tour guide of Coastal Adventure Tours dragged the boy “bleeding into the shallows” after he heard the dad’s screams for help.

Mr Coles told the Sun Online: “My group were just coming out of the water when I heard the father of the young boy calling for help.

“So I swam out and helped the young boy back in while his dad kept look out with the speargun in case it came back.

“I’m sure any of the locals would have done the same.

“The young boy was very cool. He told me he’d been bitten by a shark but had kept really calm.

“He loves snorkelling so I don’t think it will deter him.

“He’ll have a nice scar on his foot and a cool story to tell as the years go on.”

Mr Coles said the dad had been confused about the attack at first — and didn’t realize the seriousness of the situation.

The pair hadn’t actually caught any fish to attract the predator’s attention in the first place.

The man “thought he [the boy] was just pointing out the shark to him, but then he yelled ‘it bit me’. It was a pretty big open wound, open quite wide.

“When this sort of thing happens, even if it doesn’t end up being that serious, you think about what could’ve happened,” Mr Coles added.

Jackson was given first aid by off-duty doctors who were at the beach, before he was airlifted to Perth Children’s Hospital where he underwent surgery.

The attack left a six inch laceration on the boy’s foot.

“Since it bit me, I wanted to take one of its teeth so I could remember it,” he said.

“I still like sharks. But I just don’t want to swim too close to big ones like that.

“I want to go back surfing. I just love the ocean.”

The boy’s family, who have been travelling around Australia for the past nine months, are expected to return home to Sydney this week so he can recover.

Mr Coles also told the Sun: “Sharks only need a small amount of fish blood to make them curious.

“His dad may have had the smell of fish on the spear gun from a previous day.

“Most sharks don’t want to know you. The locals here swim with the tiger sharks all the time.

“[The sharks are] friendly here. But if they can smell fish blood or you look like a seal when sitting on a surfboard that’s when they get curious.

“You’d be more likely to die in a car crash driving from Perth to Coral Bay than getting bitten by a shark.”

Last month a 59-year-old surfer was mauled to death by a 14ft great white shark after he was bitten on his upper right thigh while out in the water with his three pals as he heroically tried to warn others.

Back in March a fisherman was able to cheat death when he was attacked by a shark, by punching it in the face.

Jackson Howson quickly swam away bleeding after being savaged by the beast in waters off Coral Bay, in Western Australia.

According to nypost.com. Source of photos: internet