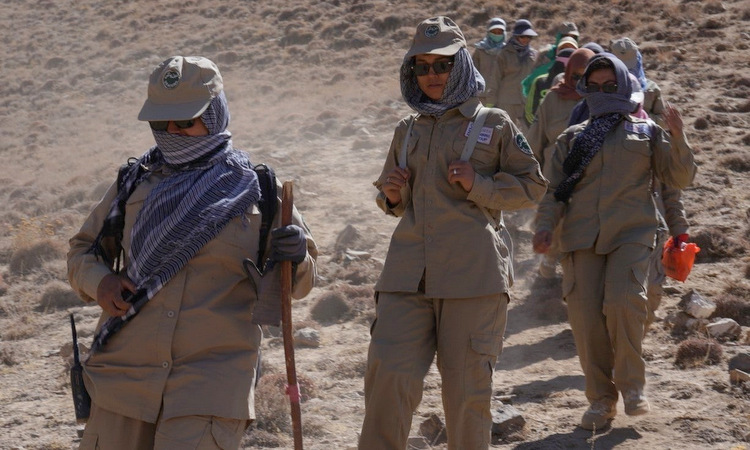 Nearly 100 Afghans are killed every month by unexploded mines, and yet when Gulandam first signed up to help with de-mining efforts, men would hurl insults at her in the street.

“At the beginning we faced many problems, especially when we used to walk around Bamyan wearing our de-mining clothes,” explains Gulandam, one of the first 16 female de-miners on a team whose funding is provided by the UN Mine Action Service (UNMAS).

Her family were also worried that the job was “too risky” for a woman.

Afghanistan has been ranked by Amnesty International as the most dangerous place in the world to be a woman, and with the recent murder of parliamentary adviser Mena Mengal for her public role, Gulandam understood the risk she was taking going to work every day.

But despite the risks, women like her have been at the forefront of recent de-mining efforts and in October this year, Bamyan was declared the first province in Afghanistan to be completely cleared of all known mines.

It was achieved by Afghanistan’s first mixed de-mining team, with the majority of the team being composed of local Afghan women.

De-mining work has taken place in Afghanistan since 1989, clearing more than 18 million mines and explosive remnants of war, most of which were left by Soviet troops during the Afghan-Soviet war (1979-1989) as a tactic to protect supply chains and outposts.

It was only last year that women took part in the country’s de-mining operations – nearly 30 years after efforts began.

When the Taliban rose to power in 1996, it imposed many rules on the conduct of women, attempting to deny women’s access to education and banning them from being employed in most public jobs.

Today, the Taliban no longer has the power to enforce such rules, but Afghan women who work still face the threat of retaliatory attacks from conservative groups and family members.

Sitting some 250km west of Kabul, the mountainous region of Bamyan is the cultural capital of the persecuted Shia Hazara minority, as well as being the site of the renowned Buddhas of Bamyan, destroyed in the anti-idol campaign launched by the Taliban government in 2001.

“When I work as a de-miner, I feel like I am a soldier combating with our hidden enemies, the landmines,” continues Gulandem.

The work is slow and risky; it can take a month for a team of 10-lane de-miners to clear just 10,000 square metres of minefield – about the size of a football pitch.

The team searches for mines using metal detectors and upon detection, the team leader is called to assess the type of mine. The mine is then either detonated through a controlled explosion or, depending on its type and age, removed and deactivated.

One of the last minefields cleared in Bamyan by the de-mining team took more than two hours to reach by foot, with the team leaving at 6am to climb the rocky terrain to the minefield. One wrong move could end in the loss of limbs or worse.

“I proved to my family that if a man can learn and handle risky jobs, a woman can too,” says Gulandem.

Where land has been cleared, not only are lives saved, but Afghans can start reclaiming the land for agricultural use.

“Today, the residents of Bamyan are much more familiar and appreciative of our work and the street harassment has reduced,” says Gulandem.

In a country where jobs are hard to find, working as a de-miner presents a valuable opportunity for women.

“My main motivation to join the team was to be financially independent,” says Mamlakat, an Afghan mother in Bamyan.

After divorcing from her husband nine years ago due to his drug addictions, Mamlakat moved back in with her parents, but needed money to raise her daughter.

“I feel happy to work as a de-miner since it solves my financial problems and enables me to contribute to the security of people.”

One of the women on the de-mining team, Fezah Fezayee, has used her wages to pay for her uneducated husband to go back to school and complete his education.

Makiz Nasirahmad, an advocacy officer for UNMAS, says that whilst most of the mines from the Afghan-Soviet war have been cleared, the main challenge now is removing unexploded ordnance left by recent fighting.

Having fled Afghanistan as a child in the late 1990s, Makiz returned in 2018 to work for UNMAS.

“It is well known that history hasn’t been kind to Afghan women. To work with the women de-miners, whose work challenges many stereotypes about women in this country, has truly been incredible.

“I believe that it will inspire our fellow Afghan women and symbolise the power of women to our men.”