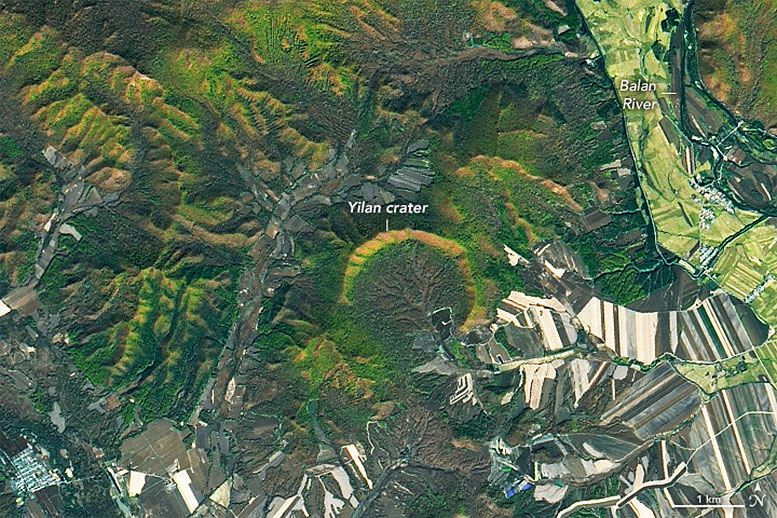 Despite China’s large land area, only one impact crater—the relatively small Xiuyan crater in Liaoning province—had been discovered there prior to 2020. Then, last year, a team of geologists found another crater northwest of Yilan in Heilongjiang Province. The crater was discovered in the heavily forested Lesser Xing’an mountain range, where local residents knew it as “Quanshan,” or “circular mountain ridge.” 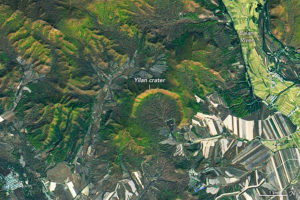 The Yilan crater, slightly larger than Xiuyan, spans about 1.85 kilometers (1.15 miles), making it the largest crater on Earth under 100,000 years old. Carbon-14 dating of charcoal and organic lake sediments suggests the crater formed between 46,000 and 53,000 years ago. Meteor (or Barringer) Crater in Arizona is also roughly 50,000 years old, but its diameter is 1.2 kilometers (0.75 miles).

Although the asteroid that created the crater struck relatively recently in geologic time, the granite rocks it impacted were much older, having formed about 200 million years ago in the Early Jurassic Period. To investigate the impact structure, the research team drilled down 438 meters (1,440 feet) into the center of the crater, where they found hundreds of meters of ancient lake sediments and shattered granite.

The crater is just the second impact crater ever found in China and adds to the 190 known craters worldwide. The new one has been named Yilan, after a nearby city.