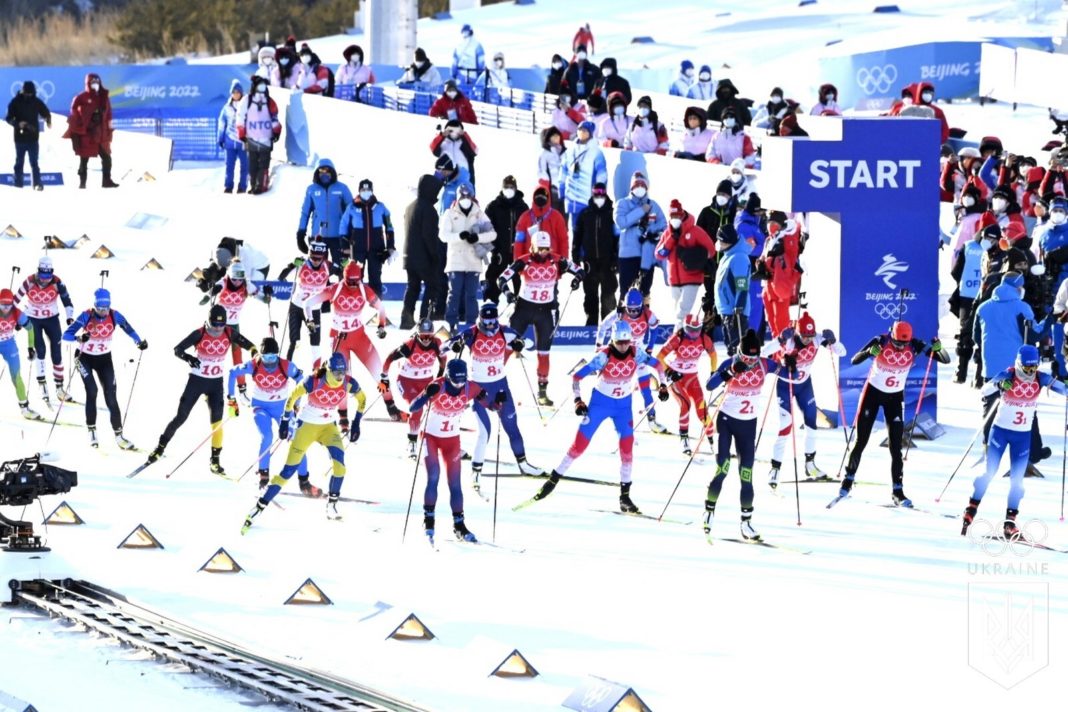 As Beijing has become the world’s only city to host both Summer and Winter Olympics, the host country China is more than happy to see the following elites crossing boundaries here:

Montell Douglas will never forget the special moment when she walked back into the “Bird Nest” at the Beijing 2022 opening ceremony on Friday night.

“Felt so surreal to walk back into the stadium that I raced in my first Olympics 14 years ago,” she wrote on Twitter.

Chosen to compete in the two-woman bobsleigh at the Beijing Winter Olympics, 36-year-old Douglas has become the first woman to represent Britain at both Summer and Winter Olympic Games.

“I’m over the moon to be representing women. There have been many male summer and winter Olympians, so I’m more thrilled about leaving a legacy like that behind than anything else,” she told local media.

Bobsleigh brings her full circle. Douglas, the former British record holder over 100m with 11.05 seconds, represented Britain in both the 100m and the 4x100m relay at the Beijing 2008 Olympic Games.

She also competed at two World Championships, the Commonwealth Games, as well as the European Indoor and Outdoor Championships.

The former sprinter has a successful transition. She joined British Bobsleigh in 2016 and finished in the top 10 on her Bobsleigh World Cup debut in 2017. She travelled to PyeongChang, South Korea in 2018 as Britain’s reserve athlete, and now she competes herself in Beijing.

“You’re never too old, it’s never too late, you should always dream and dream big.” she said.

Burghardt, a semifinalist in Tokyo 2020 over 100m, is representing Germany in bobsleigh at Beijing 2022.

Discovering her love for athletics at a young age, Burghardt competed in the 100m hurdles at the 2011 World U18 Championships. She won gold in both 100m and 200m at the 2021 German Championships.

As a dedicated sprinter, Burghardt had previously turned down requests to test as a brakewoman until last year. She began her bobsleigh journey just after the 100m and 4x100m races at the Tokyo 2020.

“Sometimes I feel like a double agent!” she said. “It’s quite stressful and if you want to compete at a high level in both things for more than just four months – like I am doing right now – then I think it might get a little bit too much.”

Prior to making her Winter Olympics debut, Burghardt won two silver medals at World Cup events with Mariama Jamanka in Winterberg and Altenberg.

Setting foot again in Beijing where she competed in mountain biking in 2008, Jaqueline Mourao is an undoubted Olympic veteran.

Qualifying for cross-country skiing at the Beijing Winter Olympics, 46-years-old Mourao created history. She will be the first Brazilian athlete to compete at the Olympic Games eight times.

“I am making history for the most Olympic appearances by a Brazilian,” the versatile athlete said. “It’s a great honor to be able to carry our flag at the opening ceremony.”

Mourao, who has represented her country in mountain biking, cross-country skiing and biathlon, is also the first Brazilian woman to compete at both Summer and Winter Olympics. As a professional cyclist, she made her Olympic debut in mountain biking at Athens 2004.

Born in a warm-weather country, Mourao picked up skiing in 2005 after a snowstorm prevented her from continuing her cycling training in Canada, and she seized the opportunity to compete at Turin 2006. She added the biathlon to her repertoire for Sochi 2014.

Although the veteran has yet to pocket a medal at the Olympics, she arrived in Beijing with a newly-won silver medal in the regional 5km cross-country ski race in Zlabtibor, Serbia.

“In 2008, I wasn’t a very mature athlete, mentally,” Mourao said, embracing the past and recognizing her progress. “Today – perhaps because I’ve become a mother twice and had all these other experiences – I’m more focused on myself and my performance and can better channel the energy at what I want to do.”

Nathan Crumpton has already made an impressive Winter Olympics debut in Beijing. The American Samoa flag-bearer appeared shirtless in native dress with his torso gleaming despite the freezing temperature, stunning the world at Friday’s opening ceremony.

Crumpton has also become the first athlete to compete for American Samoa in both the Summer and the Winter Olympics, as he ran the 100m at Tokyo 2020 Olympic Games.

“It’s an honor to be named to the Olympic team and it’s an honor to compete in China,” he said. “This is going to be two Olympic Games in less than one year.”

He originally competed in track and field in college, but then he chased his dreams in skeleton, winning American Samoa’s first gold medal in a winter sport at the 2019 North American Cup.

It has been a long journey for Crumpton, who is also a model and photographer, to take part in the Winter Olympics, as many setbacks, financial constraints and injuries came along the way.

“At the end of this crazy 11-year skeleton journey and the conclusion of this part of my athletic life, I have to say thank you to everyone for your help,” he said.

After his Olympic skateboarding debut on home soil in Tokyo 2020, Ayumu Hirano continued to challenge himself. “I’m going to switch to snowboarding soon,” he said. “There is not a single day to waste.”

Hirano, a two-time Olympic snowboarding silver medalist who grew up riding his father’s own skatepark ramps, announced in November 2018 that he would try to qualify and compete at Tokyo 2020 in skateboarding. He won the Japanese national skateboarding championships in May 2019.

Born in 1998, Hirano won a silver medal at Sochi 2014, becoming the Games’ youngest ever snowboarding medalist.

Hirano will aim for his first gold medal in snowboard halfpipe at the Beijing Winter Olympics and resume his rivalry with American legend Shaun White. Four years ago, White claimed his third Olympic gold in PyeongChang, beating Hirano to second place. A major threat could also come from Hirano’s compatriot Yuto Totsuka.

Hirano has maintained great form this season. He won the snowboard halfpipe crown at the Laax Open last month, claiming his first overall World Cup championship in the process. In December 2021, he became the first person in snowboard history to land the elusive triple cork trick in competition.

“I want to have no regrets and make sure I give it everything I’ve got,” said Hirano. “I want to give a performance I can be happy with and express myself. I want to express myself in a way that only I can.”