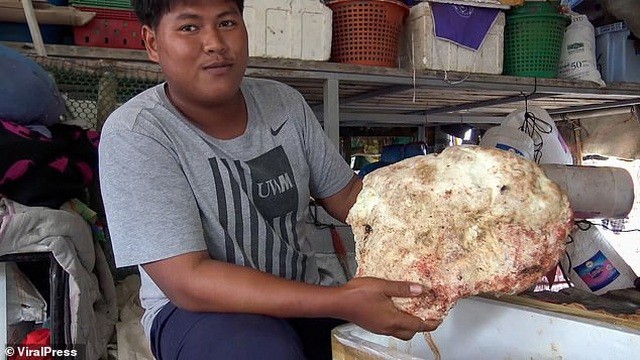 Chalermchai Mahapan, 20, had just docked his boat at Samila Beach in Songkhla province when he found the rare substance on January 6. He said he was catching mullet when the weather suddenly changed so he had to return to shore early. However, as he pushed the boat to dock, he noticed the white lump in the sand being pushed by currents to the beach.

At first, he thought it was just an ordinary rock but after looking again, he had a hunch that it could be something valuable. Curious at what it was, the fisherman took the substance home to check, burning pieces on a spoon, which indicated it was ambergris. He said: “I had no idea what this thing was until I asked the elderly villagers here who informed me about ambergris. I feel very lucky to have found it.” Chalermchai took a piece of the ambergris and burnt it under a lighter which quickly melted.

Ambergris is produced by sperm whales when bile ducts in the gastrointestinal tract make secretions to ease the passage of large or sharp objects. The whale them vomits the mucilage which solidifies and floats on the surface of the ocean. The solid chunk has a foul smell at first but after the mucilage dries out, it develops a sweet and long-lasting fragrance, which makes it a sought-after ingredient in the perfume industry.

In April 2016, a 1.57kg ambergris ball found in Lancashire sold for £50,000 while in November of the same year, three Omani fishermen found 80kgs of ambergris and sold it for $3 million.