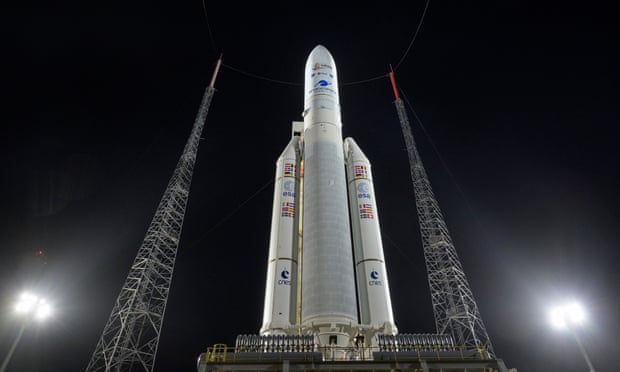 The telescope’s showpiece: a gold-plated mirror more than 6.5 metres (21 feet) across. Protecting the observatory is a wispy, five-layered sunshield, vital for keeping the light-gathering mirror and heat-sensing infrared detectors at subzero temperatures. At 21 by 14 metres (70 by 46 feet), it is the size of a tennis court.

The world’s largest and most complex space science observatory will now begin six months of commissioning in space. At the end of commissioning, Webb will deliver its first images. Webb carries four state-of-the-art science instruments with highly sensitive infrared detectors of unprecedented resolution. Webb will study infrared light from celestial objects with much greater clarity than ever before. The premier mission is the scientific successor to NASA’s iconic Hubble and Spitzer space telescopes, built to complement and further the scientific discoveries of these and other missions.

Ground teams began receiving telemetry data from Webb about five minutes after launch. The Arianespace Ariane 5 rocket performed as expected, separating from the observatory 27 minutes into the flight. The observatory was released at an altitude of approximately 870 miles (1,400 kilometers). Approximately 30 minutes after launch, Webb unfolded its solar array, and mission managers confirmed that the solar array was providing power to the observatory. After solar array deployment, mission operators will establish a communications link with the observatory via the Malindi ground station in Kenya, and ground control at the Space Telescope Science Institute in Baltimore will send the first commands to the spacecraft.

The $9bn observatory hurtled towards its destination 1.6 million kilometres (1 million miles) away – or more than four times beyond the moon. It will take a month to get there and another five months before its infrared eyes are ready to start scanning the cosmos.