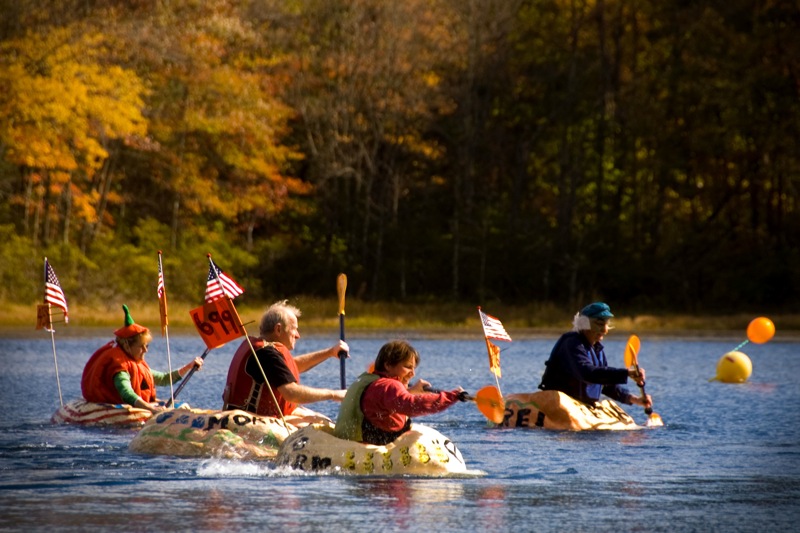 In the age-old fairy tale, Cinderella travels in a giant pumpkin carriage to meet her prince.

In real life, everyday guy Duane Hansen paddled an 846-pound floating pumpkin for 38 miles in the Missouri River to attain a world record – on his 60th birthday, no less.

People are calling him “Cinderfella.”

It took Hansen, of Syracuse, Nebraska, nearly a decade to grow the giant gourd named “Berta” before he hollowed it out and created a cooler inside that allowed it to float for a river journey. That dedication made it possible for him to eclipse the world record for the “longest journey by a pumpkin boat” as Hansen paddled “SS Berta” for 11 hours.

Hansen is set to take over Rick Swenson’s 2016 World Record completed for a 25-mile trip from Grand Forks, North Dakota,  to Oslo, Minnesota. World Records still has to approve the trek.

“Congratulations Duane for smashing the world record,” the city of Bellevue wrote in a Facebook post. “We are proud that you started this record-breaking 38-mile journey in Bellevue and it’s been fun to follow along. …Seems like a unique if not slightly crazy way to celebrate his 60th birthday.”

Hansen began his journey by strapping the giant pumpkin to a mattress and hauling it on a trailer. Wearing denim shorts and a life jacket, he got into his pumpkin as family and friends watched from public boat docks. The biggest hurdle was waves from other boats threatening to tip over his pumpkin boat.

Hansen told local media outlet News Channel Nebraska that he couldn’t even wave to anyone because of the balancing act he had to manage as water began to leak into the pumpkin.

Hansen finished his journey to cheers from family and townspeople. It was a one-time journey, though. “I ain’t gonna do this again. I’m done with this,” he told News Channel Nebraska.

Hansen may have the record for floating pumpkins, but he isn’t the first to grow one and try to paddle it. A Tennessee man grew a 910-pound pumpkin in 2019 that floated. Morton, Illinois, hosts a 500-pound-pumpkin boat race at an annual festival.

According to www.usatoday.com. Source of photo: internet