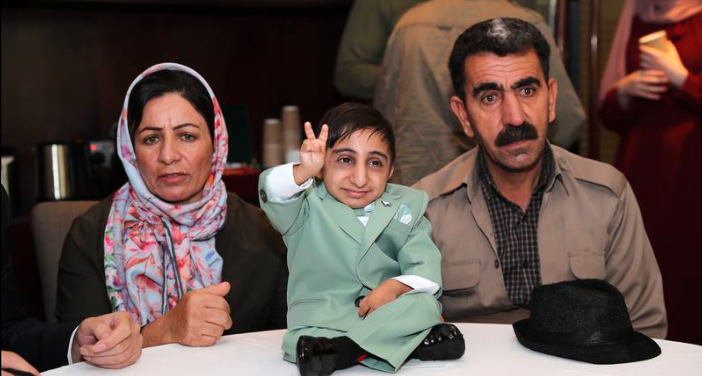 Afshin Esmaeil Ghaderzadeh, a 20-year-old from Iran has broken the record of the world’s shortest man. He measures 65.24 cm (2 feet 1.6 inches), beating the previous record holder by close to 7 centimeters. Afshin was discovered in Bukan County, West Azerbaijan Province, Iran, and was born on July 13, 2002.

Afshin, along with his parents, left his Iran home for the first time and visited the World Records office in Dubai to verify the record. Afshin was measured three times in 24 hours after which he was declared the world’s shortest man.

Many users on YouTube commented on the video and expressed their views about the world record. One user wrote, “Congratulations, wish him a healthy and happy life,” while another commented, “It seems he has a very generous and kind personality.”

While in Dubai, Afshin also visited the world’s tallest building, the Burj Khalifa, in Dubai. To celebrate the new world record, Afshin also visited a barber in Dubai for a quick shave and trim and a tailor to have his suit altered. His three-piece suit is made for a 2-3-year-old child.

As for Afshin, he can speak both Kurdish and Persian, using the Farsi dialect. He was born with a body weight of 700 gm and has grown now to almost 6.5 kg.

Afshin also knows how to use a smartphone but finds it challenging to carry it with him. “Phones in general are heavy to use for a long time, yet I still manage,” he was quoted as saying.

Afshin spends a lot of his time watching cartoons, but more recently he has started scrolling and exploring social media. His friend helps him to be in touch with his followers on his Instagram account @mohamadghaderzadeh_official.

According to www.dnaindia.com. Source of photos: internet