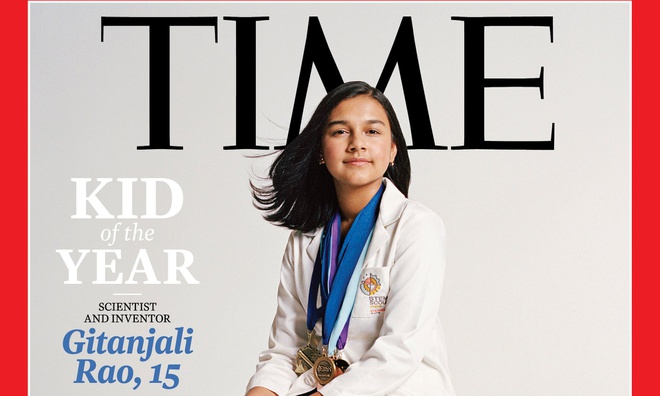 The Colorado teenager was picked for the title out of a field of more than 5,000 Americans, aged 8 to 16, the mag said Thursday.

“My goal has really shifted not only from creating my own devices to solve the world’s problems, but inspiring others to do the same as well,” Rao told Angelina Jolie in an interview for TIME.

It’s just the latest award for the prodigy, who won the Young Scientist Challenge at 11 for creating a device that detects lead in water in response to the Flint, Mich., water crisis.

“I don’t look like your typical scientist. Everything I see on TV is that it’s an older, usually white man as a scientist,” she told Jolie.

“From personal experience, it’s not easy when you don’t see anyone else like you. So I really want to put out that message: If I can do it, you can do it, and anyone can do it.”

The wunderkind has also developed an app called Kindly, which uses artificial intelligence tech to detect early signs of cyberbullying.

“You type in a word or phrase, and it’s able to pick it up if it’s bullying, and it gives you the option to edit it or send it the way it is,” Rao explained in the interview.

“The goal is not to punish. As a teenager, I know teenagers tend to lash out sometimes. Instead, it gives you the chance to rethink what you’re saying so that you know what to do next time around.”

While TIME has picked a “Person of the Year” for the last 92 years — and named then-16-year-old Greta Thunberg as the youngest person to ever receive the honor in 2019 — it has never had an award dedicated solely to kids.

To find the most influential child of 2020, the mag partnered with Nickelodeon and searched social media and school districts across the country.

Five finalists, including Rao, were then selected, and a committee of kids had the final say, along with “The Daily Show” host Trevor Noah.

Each of the lucky five will receive a cash prize and will be recognized during a “Kid of the Year” TV special hosted by Noah to air on Friday.

“These are everyday kids making a change in their communities in a fun and accessible – but very impactful – way,” TIME for Kids editor Andrea Delbanco said in a statement.