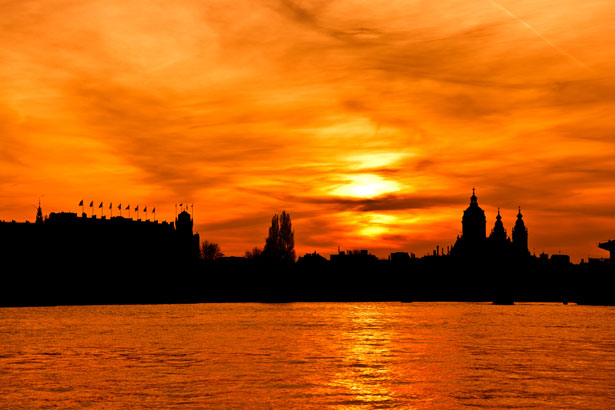 Comprising a series of interconnected platforms, the proposed “floating city” could eventually accommodate 10,000 people, according to its designers, offering coastal areas a drastic solution to the threat posed by rising sea levels.

The Oceanix project, a collaboration between designers, architects and engineers, unveiled plans for a “flood-proof” city in 2019 — and organizers have since been looking for somewhere to build prototypes. Last month, the group signed an agreement with Busan and UN-Habitat, the United Nations’ urban development agency, to host the first of its floating neighborhoods off South Korea’s coast.

Prefabricated in factories and then towed into position, the proposed platforms will rise and fall with the sea. Each of the five-acre neighborhoods has been designed to house 300 people in buildings up to seven stories high.

Ultimately, these communities could be arranged into larger networks, connected via walkways and bicycle paths. According to Bjarke Ingels Group (BIG), the Danish architecture firm leading the design, the neighborhoods could be clustered around a central harbor to form larger 1,650-person villages.

These villages could then, in theory, join to form a wider 10,000-person metropolis — dubbed Oceanix City — complete with everything from restaurants and co-working spaces to urban farms and leisure facilities.

South Korea’s southern coastline, where Busan is located, is considered especially vulnerable to the impact of rising sea levels. Greenpeace Korea last year warned that the city’s famous Haeundae Beach could disappear by 2030, according to local media reports.

And the impact is already being felt — a study in the journal Sustainability found that the city experienced worse flood damage than anywhere else in South Korea in the 10 years up to 2020.

The proposed settlement has been envisaged as “self-sustaining,” with residents able to produce their own food and energy in “zero waste closed-loop systems.”

Neighborhoods will be designed with communal farms, aquaponic food-growing facilities and compost gardens, while seafood farms could be situated in the surrounding waters.

Uninhabited platforms could meanwhile host floating wind turbines and solar panels, or be used to grow bamboo for the construction of new buildings.

BIG’s proposed urban plan accounts for the production of freshwater, too, with on-site treatment plants and systems for collecting and storing rainwater. The architects have also envisaged fleets of electric vehicles — from hydrofoil water taxis to solar-powered ferries — connecting the neighborhoods with other parts of the city and the mainland.

Oceanix co-founder Itai Madamombe said via email that the first prototype neighborhood in Busan will be complete, with people living in it, by 2025. She added that the project is currently in discussion with 10 other governments about deploying the technology developed in Busan.

In a statement, Busan’s mayor Park Heong-joon welcomed the agreement, saying: “With the complex changes facing coastal cities, we need a new vision where it is possible for people, nature and technology to co-exist.”

The director of UN-Habitat, Maimunah Mohd Sharif, meanwhile described Busan as the “ideal” location for the prototype.

“Sustainable floating cities are a part of the arsenal of climate adaptation strategies available to us,” he is also quoted as saying in a press release. “Instead of fighting with water, let us learn to live in harmony with it.”