Live footage showed the 47-metre (154ft) rocket soaring into the air with bright yellow flames shooting out of its engines following blastoff at Naro Space Center, the country’s lone spaceport, on a small island off its southern coast. 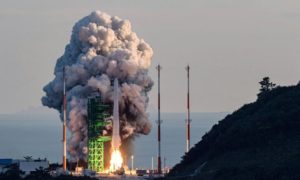 After the launch, the Korea Aerospace Research Institute (Kari), the country’s space agency, reported that Nuri’s first and second stages separated properly and that the third stage carried the payload – a 1.4-tonne block of stainless steel and aluminium – 435 miles above Earth. But Moon, who observed the launch at the Naro spaceport, said in a televised speech that the payload did not stabilise in orbit after being separated from the third stage.

The launch, which took place at 5pm (0900 BST), was delayed by an hour because engineers needed more time to examine the rocket’s valves. There had also been concerns that strong winds and other conditions would pose challenges for a successful launch.

South Korea had previously launched a space launch vehicle from the Naro spaceport in 2013. It was a two-stage rocket built mainly with Russian technology. That launch came after years of delays and consecutive failures. The rocket, named Naro, reached the desired altitude during its first test in 2009 but failed to eject a satellite into orbit, and then exploded shortly after takeoff during its second test in 2010.

Scientists and engineers at Kari plan to test Nuri several more times, including conducting another launch with a dummy device in May 2022, before trying with a real satellite.