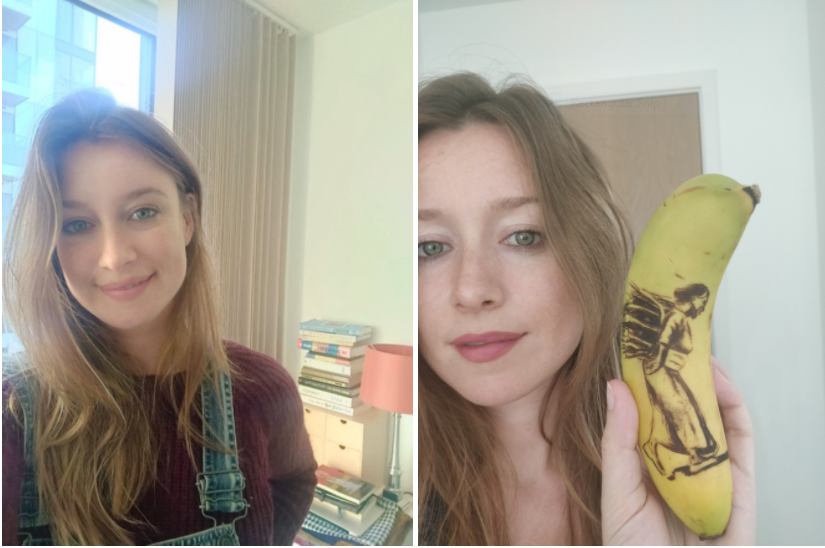 But in March 2020 when she became sick with a suspected case of coronavirus and was self-isolating at her London, England home, she started to go “a little bit stir crazy.”

These are no lazy doodles. She bruises the bananas to create elaborate drawings, which she shares daily on her Instagram page. They encompass everything from a detailed rendition of the Mona Lisa to a sketch of Homer Simpson in a muumuu.

“I don’t use a pen or paint or anything,” she said. “It’s purely by using the peel of the banana.

Her tool of choice is a seam ripper, but she said any pointed implement will do. After she draws by pressing into the banana peel, causing it to oxidize or bruise, the marks become darker over time, and she uses that effect to create different shades.

“I don’t … press harder to create a darker line or anything. It’s all done in timing,” she said. 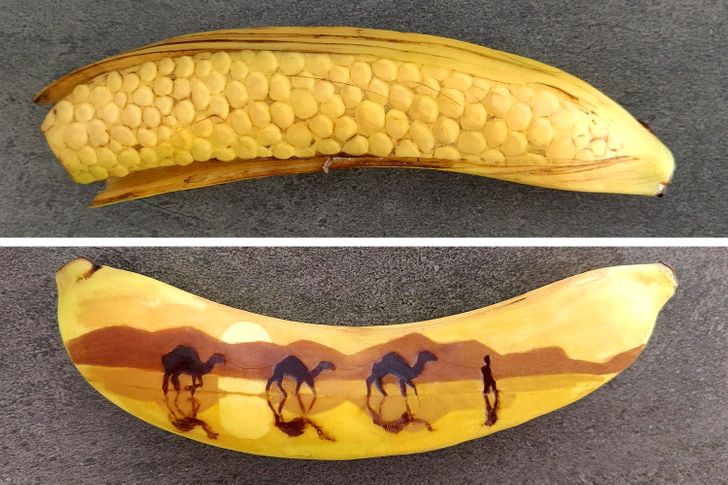 “You start with the parts that you want to be the darkest first and then you wait for that to get darker and then you do the slightly lighter parts next.”

Chojnicka said what started as a way to pass time during the pandemic has become something more meaningful.

She’s taught banana art classes to seniors who are feeling isolated during the pandemic. And she’s raised money for FareShare, a U.K. charity that distributes food for people in need and advocates against food waste.

On any given day, she draws what feels right in the moment. She’s done landscapes, portraits, political and social justice messages, cartoons, an ode to health-care workers, and more.

When she’s done a piece, she documents it, and then eats the banana.

“I think people have the idea that I’m, you know, chugging bananas by the sack load. Actually, I have one a day or even one every two days because sometimes I’ll do two images on either side of the banana,” she said. “So it’s pretty manageable.”

“I used to draw a lot as a kid, and through school I did art and I loved it. But as an adult, it’s something I neglected. And I think, sadly, that’s something I think too many of us do … We kind of let go of the things that really bring us joy in childhood, that tend to be creative,” she said.

“This has been a really nice way of reconnecting with my more artistic side and challenging myself, like on a daily basis, to be imaginative and come up with a new idea.”