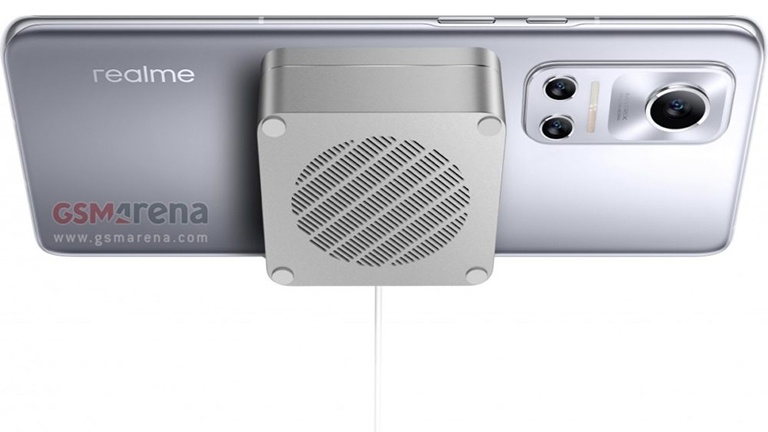 A few days back, we saw renders of Realme’s so-called MagDart chargers that are supposed to mimic the functionality of Apple MagSafe by magnetically attaching to a phone for charging. Now, a new leak from folks over at GSMArena gives us our first look at the first Android phone that would support magnetic charging.

As confirmed by Realme in a tweet, the Realme Flash will introduce magnetic charging to the Android ecosystem. Leaked renders of the phone show that it’ll be a flagship powered by the Snapdragon 888 chipset. An image showing the “About phone” page of the phone further shows that the Realme Flash will get 12GB of RAM and 256GB of storage, possibly at the top end. Android 11 is also on board.

The design includes a curved display upfront with a punch hole cutout on the corner. There’s a triple camera setup at the back, but unfortunately, the leak doesn’t shed light on the sensor configuration.

As for the MagDart charger, we see a bulky square-shaped accessory attached to the back of the phone. GSMArena was able to confirm that the charging speeds will exceed 15W and that Realme’s solution will be the fastest magnetic charging tech in the world when it launches. We previously heard that it would rival modern wired fast-charging tech.

If Realme is indeed using a MagSafe-like solution, then you can expect the Realme Flash to have magnets surrounding the charging coil inside the phone. This would make it easier to align the charging coil in the phone with a supported charger. It would also mean that Realme might be able to introduce other magnetic accessories with the Realme Flash, just like Apple did in the form of its wallet attachment and the new MagSafe battery pack. We’ve seen magnetic docking on phones like the Nexus 5 before but it has four metal plates in the back panel surrounding the charging coil to enable the feature.

Realme is also expected to have a less chunky puck-shaped magnetic charger in the works. It resembles Apple’s MagSafe, but it might not be as fast as its boxy sibling. We expect Realme to disclose more details about the Realme Flash in the coming days. We’ll keep you posted when we hear more.