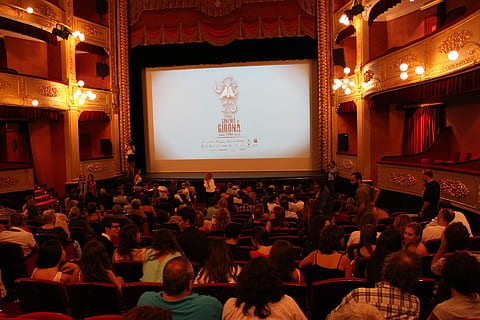 Officials with the organization have named the 13-seat Little Prince Micro-Cinema as the world’s smallest purpose-built cinema in operation.

The micro-cinema, complete with a Victorian-themed lounge and concession stand, officially opened in October along Wellington Street in Stratford’s downtown.

“(It’s) exciting. It’s been a long time in the making,” said owner and operator, Leigh Cooney, in an interview Wednesday with Global News.

“This has been something … probably over two and a half years now since I originally built the tiny screening room itself, and then it was just a lot of heartache between now and then to finally get the doors open.”

Cooney previously operated Meet Your Maker out of the Wellington Street address, a gallery and gift shop which held small art shows in the space at the back of the shop, now occupied by the tiny theatre.

“We started working with local filmmakers doing little competitions around town and we thought, ‘Well, how great would it be if we built a screening room permanently?’” Cooney said.

What began as a small screening room with some folding chairs, a pull-down screen, and a digital projector morphed into a Victorian-themed tiny cinema, complete with tiered seating, red carpeting, velvet ropes, vintage movie posters, and an old-timey box office kiosk.

Cooney says it was while looking for inspiration from other mini-cinemas that he learned of the previous World Record holder, Cabiria Cine-Cafe in Brazil, which had held the distinction since 2009.

“I thought, well, if we’re going to make it into a quote-unquote movie theatre, then we should make it look like a movie theatre. And my tastes just always go to the old-timey stuff.”

The World Records website lists Nov. 27, 2021, as the date when The Little Prince Cinema achieved its status as the smallest purpose-built cinema in operation, a date Cooney says is when they finalized and submitted their application.

Guinness World Records is based in the UK, but is published by the Vancouver-based Jim Pattison Group. It has no modern-day affiliation with the Guinness beer brand or with parent Diageo.

“Because Guinness is in the UK, we had to find our own witnesses that would serve the purposes that they were looking for,” Cooney said, referring to the process conducted to verify a record holder.

“We had quite a number of people. The mayor and some city councilors. Some film directors. And then we had to get a historian and University of Toronto professor, as well, in the film department there … That alone was a profound amount of work and effort so that did take a lot of time, and that is why they have acknowledged it as November.”

Cooney said it was a relief to be able to finally share the good news once and for all, and says the response from the community so far has been wonderful. For now, the cinema will focus on small parties and private functions.

According to globalnews.ca. Source of photo: internet