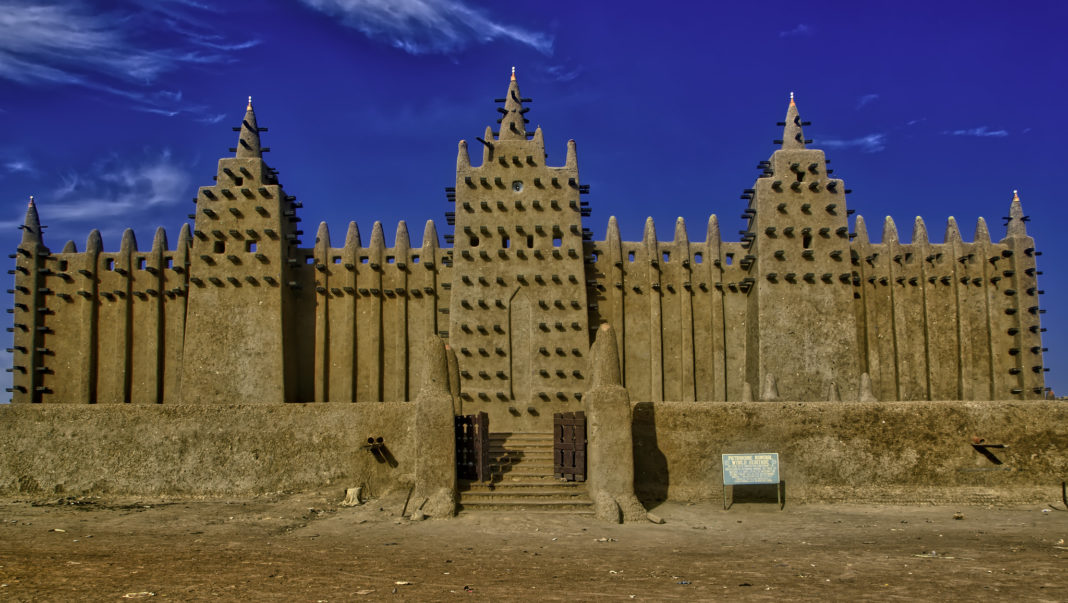 The Great Mosque of Djenné is a large brick or adobe building in the Sudano-Sahelian architectural style. The mosque is located in the city of Djenné, Mali, on the flood plain of the Bani River. The first mosque on the site was built around the 13th century, but the current structure dates from 1907.

The mosque is built on a platform measuring about 75 m × 75 m that is raised by 3 meters above the level of the marketplace. The platform prevents damage to the mosque when the Bani River floods. It is accessed by six sets of stairs, each decorated with pinnacles. The main entrance is on the northern side of the building. The outer walls of the Great Mosque are not precisely orthogonal to one another so the plan of the building has a noticeable trapezoidal outline.

The walls of the Great Mosque are made of sun-baked earth bricks (called ferey), sand, and earth-based mortar, and are coated with plaster which gives the building its smooth, sculpted look. The walls of the building are decorated with bundles of rodier palm (Borassus aethiopum) sticks, called toron, that project about 60 cm from the surface. The toron also serves as readymade scaffolding for the annual repairs. Ceramic half-pipes also extend from the roofline and direct rainwater from the roof away from the walls.

At the top of the pillars are conical extensions with ostrich eggs placed at the very top—a symbol of fertility and purity in the Malian region. Timber beams throughout the exterior are both decorative and structural. These elements also function as scaffolding for the re-plastering of the mosque during the annual festival of the Crepissage. Compared to images and descriptions of the previous buildings, the present Great Mosque includes several innovations such as a special court reserved for women and a principal entrance with earthen pillars that signal the graves of two local religious leaders.

The prayer hall, measuring about 26 by 50 meters, occupies the eastern half of the mosque behind the qibla wall. The mud-covered, rodier-palm roof is supported by nine interior walls running north-south which are pierced by pointed arches that reach up almost to the roof. This design creates a forest of ninety massive rectangular pillars that span the interior prayer hall and severely reduce the field of view. The small, irregularly-positioned windows on the north and south walls allow little natural light to reach the interior of the hall. The floor is composed of sandy earth.

The interior courtyard to the west of the prayer hall, measuring 20 m × 46 m, is surrounded on three sides by galleries. The walls of the galleries facing the courtyard are punctuated by arched openings. The western gallery is reserved for use by women.

The entire community of Djenné takes an active role in the mosque’s maintenance via a unique annual festival. This includes music and food but has the primary objective of repairing the damage inflicted on the mosque in the past year (mostly erosion caused by the annual rains and cracks caused by changes in temperature and humidity).