The Trevi Fountain (Italian: Fontana di Trevi) is an 18th-century fountain in the Trevi district in Rome, Italy, designed by Italian architect Nicola Salvi and completed by Giuseppe Pannini and several others. Standing 26.3 meters high and 49.15 meters wide, it is the largest Baroque fountain in the city and one of the most famous fountains in the world.

The Trevi Fountain took some 30 years to complete, and after Salvi’s death in 1751, Giuseppe Pannini, who slightly altered the original scheme, oversaw its completion in 1762.

The backdrop for the fountain is the Palazzo Poli, given a new façade with a giant order of Corinthian pilasters that link the two main storeys. Taming of the waters is the theme of the gigantic scheme that tumbles forward, mixing water and rockwork, and filling the small square. Tritons guide Oceanus’s shell chariot, taming hippocamps.

At its center is Pietro Bracci’s statue of Oceanus, which stands atop a chariot pulled by sea horses and is accompanied by tritons. The fountain also features statues of Abundance and Health. Its water, from the ancient aqueduct called Acqua Vergine, long was considered Rome’s softest and best tasting; for centuries, barrels of it were taken every week to the Vatican. However, the water is now nonpotable.

The legend of the Trevi Fountain says you should stand with your back to the fountain and toss a coin over your left shoulder to guarantee a return trip to Rome. 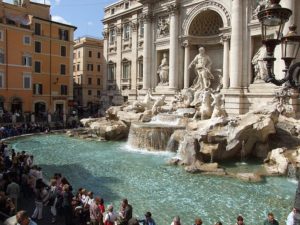