More
Home Daily news Trains powered by human waste and discarded food could be introduced to...

With a top speed of 50 mph, the 66 feet (20m) long car will turn biomethane gas into electrical power which will charge the train’s batteries and drive its motors.

The development is being support by a £60,000 grant from Innovate UK, the Government’s non-departmental research-funding agency.

This is the second such grant that the team have been awarded. The previous, for £350,000, was used to build a smaller, 60-person railcar earlier this year.

This demo ‘mini train’ — which was around 33 feet (10m) long and weighed some 12 tonnes — was put through its paces at Motorail’s Long Marston test facility in July.

In the wake of COVID-19, however, the new train will sport health features such as UV lighting, virus-killing copper surfaces, plastic shields and robust ventilation. 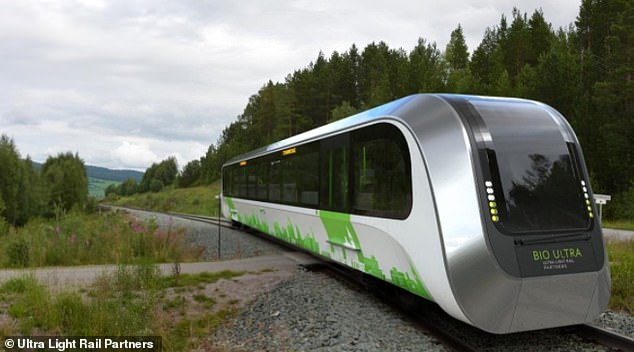 Amid plans to phase out dirty diesel engines, trains run on gas made from human and animal waste and discarded food (pictured)  could join the rolling stock of Britain’s railways. 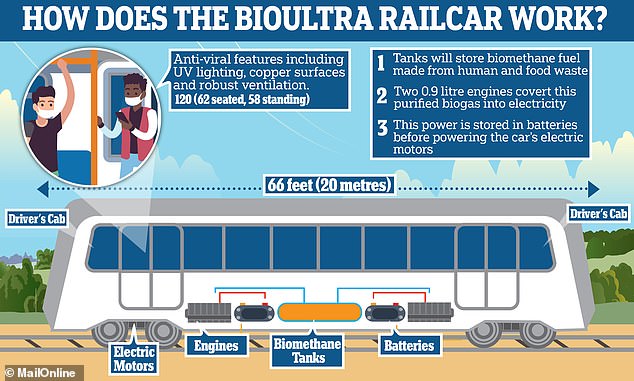 The ‘BioUltra’ railcar is the brainchild of a team of engineers led by the Worcester-based Ultra Light Rail Partners — and will be able to carry up to 120 passengers. With a top speed of 50 mph, the 66 feet (20m) long car will turn biomethane gas into electrical power which will charge the train’s batteries and drive its motors

The BioUltra train will be able to replace polluting, noisier and less efficient diesel railcars on those small branch lines which — due to the infrastructure costs — have not been electrified.

The Government has announced plans to phase out diesel-powered trains from the UK’s railways by the year 2040 — and is turning to alternative fuel sources including biogases, hydrogen and battery-powered trains.

Unlike diesel engines, biomethane-powered rolling stock would emit no toxic nitrogen dioxide — and would actually result in a net removal of carbon dioxide form the atmosphere. Despite the source of the fuel, methane has no smell.

‘Biomethane can be proved, without doubt, to be the most environmentally friendly fuel,’ said Ultra Light Rail Partners’ technical director, Christopher Maltin.

‘I am delighted that, following on from producing the world’s first tram-train to be powered by biomethane, this locally produced and sustainable fuel will continue to be used for this new railcar.’

‘The combination of biomethane as the fuel and the absence of any particulates from tyre degradation or road abrasion will result in the cleanest form of public transport, both in terms of air quality […] and climate change,’ he added.

The train will run on regular-gauge tracks but — thanks to its lightweight build at only around 20 tonnes, less than half of the typical diesel railcar — will cause less wear-and-tail on the rails, helping to lower network maintenance costs.

The capacity of the BioUltra car’s tanks will give it a maximum range of around 2,000 miles between refuelling stations.

The team envisage the BioUltra cars operating ‘turn-up-and-go’ shuttle services on existing lines — and hope they will be used on recently re-opened lines as part of the Government’s plans to reverse the ‘Beeching Axe’ of the 1960s–early 1970s.

The brainchild of the then British Railways chairman Richard Beeching, the ‘Axe’ proposed to close 2,363 stations and 5,000 miles of track in the interests of improving the railway network in the face of competition from road transport.

While public backlash succeeded in saving a number of lines, the scheme still saw around a third of Britain’s railway network abandoned.

The Government have established a £500 million fund to undo these closures and reconnect towns across Great Britain to the national railway network.