Ometepe is an island formed by two volcanoes rising out of Lake Nicaragua in the Republic of Nicaragua. Its name derives from the Nahuatl words ome (two) and tepetl (mountain), meaning “two mountains”. It is the largest island in Lake Nicaragua.

The two volcanoes (known as Volcán Concepción and Volcán Maderas) are joined by a low isthmus to form one island in the shape of an hourglass, dumbbell, or peanut. Ometepe has an area of 276 square kilometers. It is 31 kilometers long and 5 to 10 kilometers wide. The island has an economy based on livestock, agriculture, and tourism. Plantains are the major crop. 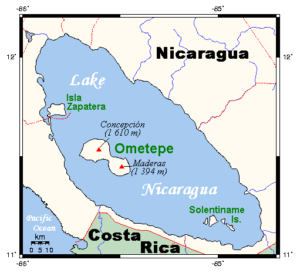 The island first became inhabited during the Dinarte phase (c. 2000 BC – 500 BC), although evidence is questionable. The first known inhabitants were speakers of Macro-Chibchan languages. Traces of this past can still be found in petroglyphs and stone idols on the northern slopes of the Maderas volcano. The oldest one dated from 300 BC. Several centuries later, Chorotega natives created statues on Ometepe carved from basalt rock.

Volcán Concepción is on the northwest half of the island. It has a base of 16 kilometers (9.9 mi) beneath its symmetrical cone, and it is an active volcano. (Baker, 2006). Because of its symmetry, it has been considered extremely beautiful. 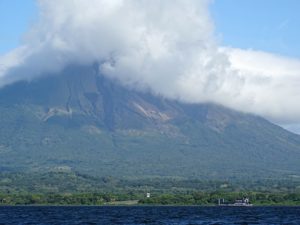 The volcanic ash has made the soil of this island extremely fertile, allowing continuous planting. The volcanoes are visible from everywhere on the island, and life on Ometepe revolves closely around them. They also play an important part in the myths and legends of the island, which once served as an indigenous burial ground.