Rede Integrada de Transporte (also known as RIT) is a bus rapid transit (BRT) system in Curitiba, Brazil, implemented in 1974. It was one of the first BRT systems in the world and a component of one of the first and most successful examples of transit-oriented development.

Curitiba has a well-planned and integrated transportation system, which includes dedicated lanes on major streets for a bus rapid transit system. The buses are long, with 157 bi-articulated (split into three sections) and 29 single-articulated vehicles, and stop at designated elevated tube-shaped stations to allow for fare prepayment and platform-level boarding, complete with handicapped access. A small ramp folds down from the bus onto the platform so there is no gap to cross to enter or leave the vehicle. All door loading and fare prepayment allow for short dwell times in stations. 20% of the stations have passing lanes to allow for express services. 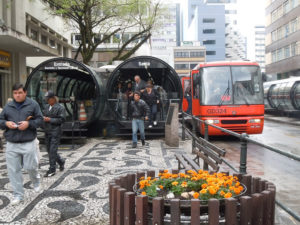 Recently, the transportation system has been facing problems due to its reduced fleet and lack of maintenance. Buses represent only 1% of automobiles and overcrowding is a serious problem.[13] Curitiba is the Brazilian capital with the highest automobiles per inhabitant ratio, with 1.2 million vehicles for a population of 1.8 million inhabitants, which explains the frequent traffic jams in the city. The citizens are forced to find alternative ways of reaching their destinations, given that overcrowding prevents the users from boarding the buses.

In 2010 the RIT received an “honorable mention” for the Green Line (Linha Verda) at the Sustainable Transport Awards of the Institute for Transportation and Development Policy (ITDP). The Green Line is also only one of twelve BRT routes across seven systems around the globe to be awarded the Gold BRT Standard by the ITDP in 2013. The remaining five RIT routes were given the Silver Standard making the RIT one of the few systems with all routes having either a Silver or Gold ranking. 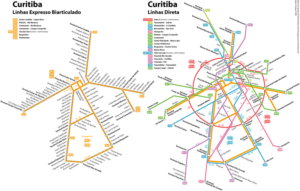