Monarto Safari Park, formerly known as Monarto Zoological Park and Monarto Zoo, is a 1,500-hectare open-range zoo located in South Australia and administered by the Royal Zoological Society of South Australia. It is located at Monarto, approximately 70 kilometers from Adelaide’s center.

The zoo features several unique attractions, including opportunities to get close to lions and cheetahs, have interactive experiences with meerkats, a Southern White Rhinoceros, and a Black Rhinoceros, and see Australia’s largest giraffe herd. 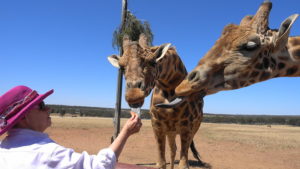 The zoo was created in 1983 on land owned by the state government as a closed-to-the-public, purpose breeding area and endangered species sanctuary. In 1990, a study was undertaken to determine the feasibility of allowing public access to the zoo, and by 1993 it had been developed into a large educational facility, open to the public, with bus and walking tours.

Five major habitat exhibits have been developed, including the Asian steppes, arid North Africa, African plains, and Asian grasslands. The entire zoo is surrounded by vermin-proof fencing to keep the habitat as self-contained as possible. The roads and trails within the zoo are constructed of local materials to keep them low maintenance, and to allow them to be easily re-integrated into the habitat should the need arise. Waste water is recycled, and as much as possible, solar power is used for electric fencing needs. 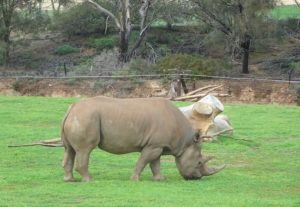