The airport is located 13.2 km east-northeast of the regional capital, Funchal, after which it is sometimes informally named. It mostly hosts flights to European metropolitan destinations due to Madeira’s importance as a leisure destination and is pivotal in the movement of cargo in and out of the archipelago of Madeira. It is the fourth-busiest airport in Portugal. The airport is named after Madeiran native Cristiano Ronaldo, who is widely considered to be one of the greatest footballers of all time. During its renaming ceremony in 2017, the airport drew media notoriety for an infamous bust of Ronaldo unveiled at the ceremony, now replaced.

Madeira Airport is a geographically unusual airport, as it is perched on a foreland jutting out to sea. At the end of runway 05, there lie hills and cliffs which make a direct ILS approach and landing unavailable. Instead, aircraft have to do a visual approach which involves flying around the airport, then circling around in a ~180° turn before lining up on a very short final approach. The airport’s runway – 05/23 – is a tabletop runway, which means there are steep dropoffs at either end of the runway – at the beginning of Runway 05, the runway drops off just before a motorway that snakes around the runway end, and at the beginning of Runway 23, which drops off a cliff. The runway is also unique in the fact that at the beginning of Runway 23, the runway is placed on a platform supported by pillars, similar to a beam bridge. 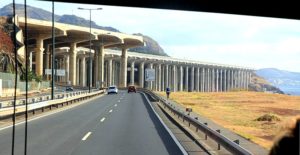 The airport is considered one of the most peculiarly perilous airports in the world due to its location and its spectacular runway construction. It received the Outstanding Structure Award in 2004 by the International Association for Bridge and Structural Engineering. The History Channel program Most Extreme Airports ranked it as the ninth most dangerous airport in the world and the third most dangerous in Europe. Pilots must undergo additional training to land at the airport.