Oriel Chambers is an office building located on Water Street near the town hall in Liverpool, England. It was the world’s first building featuring a metal framed glass curtain wall, which has since become a defining feature of skyscrapers around the world. Designed by architect Peter Ellis and built-in 1864, it has been grade I listed due to its outstanding importance.

Designed by Peter Ellis back in 1864, The Oriel Chambers moved away from the traditional brick design, making the building much lighter enabling “oriel” or bay windows to be supported easily. This transformed office space into larger and lighter spaces.

Oriel Chambers comprises 4,000 m2 of floor space set over five storeys. It managed to maximize the influx of light by employing a grid of oriel windows, which became the building’s defining feature. 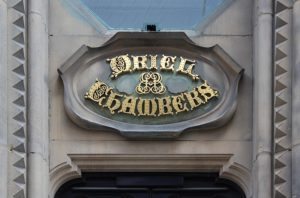 On top of the building is the motto, “Stand Sure”. Foresight indeed as the building was damaged during WW2, but still stands sure, even being used as an office today.

Initially, it was not well received. Recognizing its modernity, unsurprisingly, the critical assessment of Oriel Chambers was far more favorable in the 20th century. Nikolaus Pevsner called it “one of the most remarkable buildings of its date in Europe” in his earlier book, Pioneers of Modern Design.