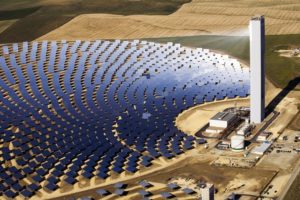 Each of the mirrors has a surface measuring 120 square meters that concentrates the sun’s rays to the top of a 115-meter high, 40-story tower where a solar receiver and a steam turbine are located. The turbine drives a generator, producing electricity.

The PS10 is located 20 km west of Seville (which receives at least nine hours of sunshine 320 days per year, with 15 hours per day in mid-summer). The solar receiver at the top of the tower produces saturated steam at 275 °C. The energy conversion efficiency is approximately 17%. 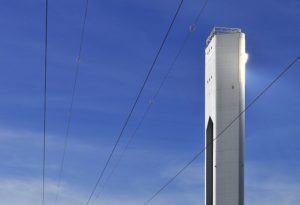 The PS10 solar power tower stores heat in tanks as superheated and pressurized water at 50 bar and 285 °C. The water evaporates and flashes back to steam, releasing energy and reducing the pressure. Storage is for 30 minutes. It is suggested that longer storage is possible, but that has not been proven in an existing power plant. However, there are many considerations for using molten salt as an energy storage medium due to the great capability of storing energy for long periods without substantial losses (see Concentrated solar power). Another possibility is to use a phase-change material as thermal storage where latent heat is used to store energy.