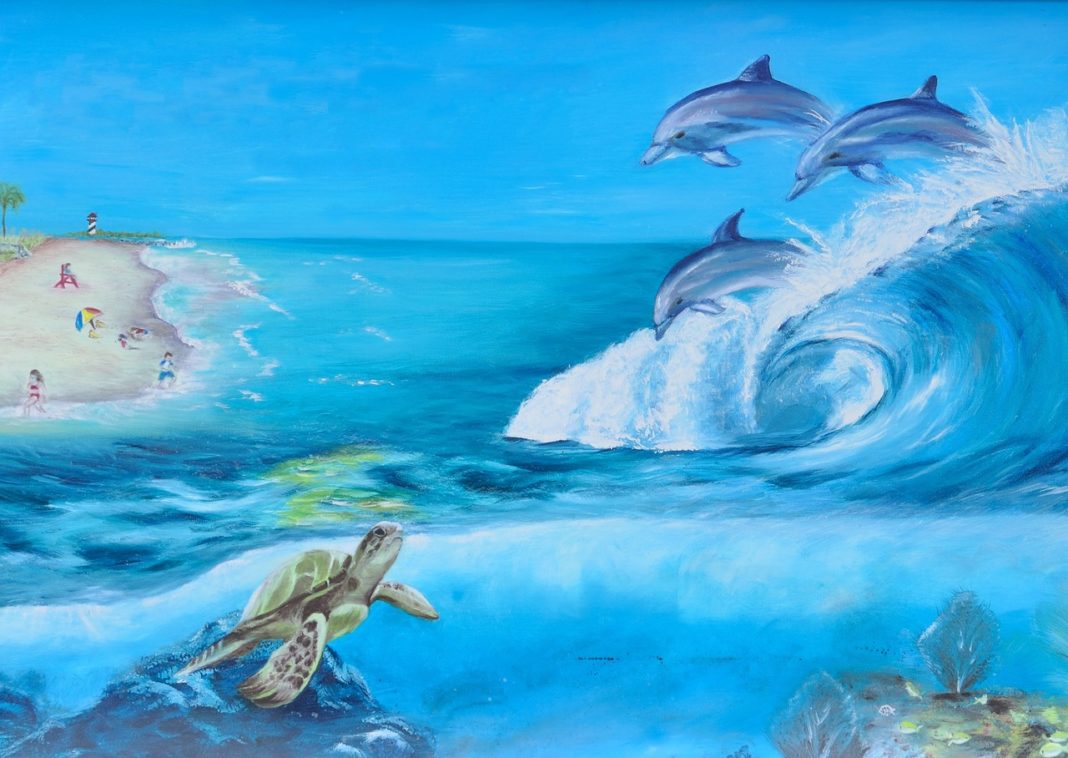 With an oxygen tank and painting supplies, artist Olga Belka sets up for a day’s work in her studio — underwater, surrounded by colorful fish and sea turtles.

Belka, the world’s first underwater artist, captures the beauty of marine life from the depths of the ocean. Though she has been painting since she was a child, her fascination with marine life began when she started scuba diving in 2016.

“Years ago, I tried scuba diving and was mesmerised by the underwater beauty so I became a professional scuba diver,” Belka told Khaleej Times at World Art Dubai 2022, where her artwork is being displayed for the first time in Dubai. “It was then I figured I have two professions in my life that are worth combining.”

To remain underwater long enough to capture the sea animals and corals, all she needs is an oxygen tank and 30kg of additional weight.

Each painting requires four to seven dives, with each dive lasting up to three hours. But for Belka, who has completed 5,000 scuba dives, being underwater is a form of meditation and the marine world has become her second home.

“Every time I go scuba diving, I want to capture my emotions, not only the marine life,” she said. “When I paint underwater, I’m in a different state of mind. I become a different person. If I show the artwork I did underwater versus a painting I created in a normal studio, people would think the work belongs to two different artists.”

Belka travels to different oceans around the world, but says it takes some diving to find the right spot. The deepest she went under the Red Sea was 29 metres to paint a sea turtle.

“Sometimes I have a plan to paint a shipwreck or a certain view, so I target a specific area under the water. Otherwise, I never know what I will find,” said Belka.

“It’s difficult to work in shallow water due to the shaky tides, but when I find a view that catches my attention two metres deep, I stop and paint.”

Belka’s unique technique of mixing paint, which doesn’t dissolve in water, is also an eco-friendly process.

“It’s my secret,” she said with a smile. “After several trials, I developed waterproof oil-based paint that lasts on the canvas.”

Her perfect spot is usually an area on the seabed next to the corals, where she can “paint quietly without disturbing the fish.”

While her main subjects are sea creatures and coral that float around her, she sometimes also paints stage scenes and compositions with additional props to capture fairytale-inspired stories.

“I love to paint entirely from nature, but sometimes I add an element of my own imagination,” Belka said.

Given the unpredictability of the underwater world, Belka said her paintings often go through several changes before completion.

“Sometimes I start painting a fish, then it wanders away. If I don’t find it in my next dive, I remove it and add something else.”

She added: “When I started painting, I was drawing books for kids so I would add features like a smiling fish with big eyes.”

Enjoying the sights of the ocean sometimes means confronting the painful truth about pollution. As a result, Belka has made it a part of her mission to raise awareness about the need to protect the marine environment.

With the outbreak of Covid-19, Belka came across several masks tangled in corals and woven around sea creatures.

“While diving at one of the shores in Thailand, I met a starfish with a mask dangling from its mouth. It was enjoying its leisure time on the coral and did not seem to care about having a mask,” she said.

By highlighting the beauty of marine life in her paintings, she hopes to inspire people to safeguard the environment.

“People who never tried scuba diving don’t know how beautiful the underwater world is. They do not see what’s hidden under the ocean,” said Belka.

Now based in Thailand and Singapore, Belka is sharing her knowledge with children and adults through specially designed courses, as she continues to capture the sea life from different parts of the world.

Having gained experience in painting underwater landscapes, Belka is now set to go in a different direction – underwater portraits.

According to www.zawya.com. Source of photo: internet