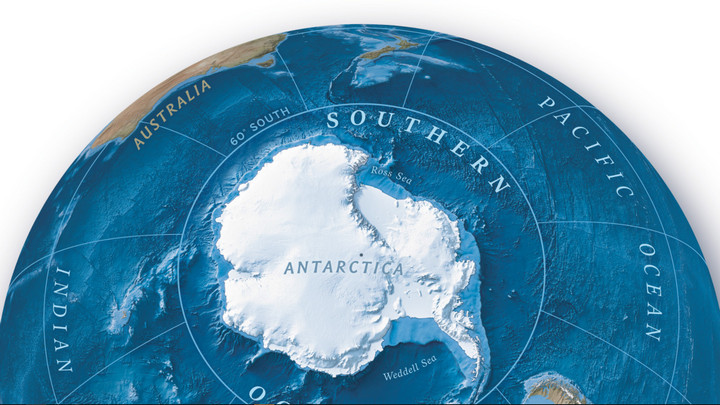 The Earth has finally attained popular recognition for its fifth ocean, with a decision by the National Geographic Society to add the Southern Ocean around Antarctica to the four it recognizes already: the Atlantic, Pacific, Indian and Arctic oceans.

Although the designation of the frigid waters around the icy southern continent as a separate ocean has kicked around for almost 100 years and is widely used by scientists, until now it has not had popular backing.

But on June 8 — World Oceans Day — the society announced it would henceforth be labeling the Southern Ocean as the fifth ocean on its maps of our planet.

“The Southern Ocean has long been recognized by scientists, but because there was never agreement internationally, we never officially recognized it,” the society’s official geographer Alex Tait told the National Geographic website. “It’s sort of geographic nerdiness in some ways.”

One of the biggest impacts would be on education, he said: “Students learn information about the ocean world through what oceans you’re studying. If you don’t include the Southern Ocean, then you don’t learn the specifics of it and how important it is.”

National Geographic began making maps in 1915, but the society had only formally recognized just four oceans, which they defined by the continents that bordered them. In contrast, the Southern Ocean is defined not by the continents that surround it, but by the Antarctic Circumpolar Current (ACC) that flows from west to east.

Scientists think the ACC was created 34 million years ago when the continent of Antarctica separated from South America, allowing water to flow unimpeded around the “bottom” of the world.

Today, the ACC flows through all waters that surround Antarctica until about 60 degrees south, except for the Drake Passage and the Scotia Sea, which are both roughly between South America’s Cape Horn and the Antarctic Peninsula.

The waters of the ACC — and therefore most of the Southern Ocean — are colder and slightly less salty than the ocean waters to the north.

The ACC pulls in water from the Atlantic, Pacific and Indian oceans to help drive a global “conveyor belt” that carries heat around the planet, while the cold dense water of the ACC sinks and helps to store carbon in the deep ocean. And thousands of marine species live only within the ACC, according to National Geographic.

Exactly what constitutes an ocean is not agreed, other than that they are the largest bodies of water. A common definition split the global ocean into four or five parts, according to the continents that surrounded them.

Nevertheless, the term “Southern Ocean” had been used to describe the waters at the bottom of the world since they were first seen by the Spanish explorer Vasco Núñez de Balboa early in the 16th century, and its use continued as oceans became vital routes for international communications and trade in the centuries that followed.

By the 19th century, many maritime nations had established “hydrographic” authorities to publish information on the oceans for their navies and merchant vessels, and the term “Southern Ocean” appeared in the early publications of the International Hydrographic Organization (IHO) that they formed in 1921.

But according to the book “Southern Ocean: Oceanographers Perspective” (Ice Press, 2015), the IHO rescinded the designation in 1953: “The majority of opinions received … are to the effect that there exists no real justification for applying the term Ocean to this body of water,” the IHO wrote in the guidelines it published that year.

Scientists didn’t agree, however, and the term has been increasingly used, as the importance and uniqueness of the Southern Ocean became more clear. The U.S. Board on Geographic Names started using it in 1999, and the National Oceanic and Atmospheric Administration (NOAA) officially began using it this year.

The original “ocean” on Earth was, in fact, a river — named by the ancient Greeks after the titan Oceanus, a river god who was the son of Uranus and Gaia and the brother and husband of Tethys, the goddess of the primal waters that nourished the Earth.

This river “Ocean” was originally thought to encircle the world, which the early Greeks imagined ended somewhere just west of Europe and east of Asia. Eventually, the term would become used to describe the different parts of the global ocean.

The related term “Seven Seas,” meanwhile, is much older than many modern oceans. No one knows where the concept originated, but the term appears in the ancient writings of the Greeks, Romans, Arabs, Hindus, Persians and Chinese, although it often described entirely different seas — some of them mythical — for different people.