The previous Olympic record was 12:39.77, so van der Poel beat it by nearly seven seconds. 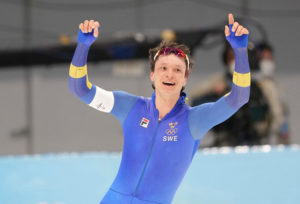 Van der Poel stumbled a bit with about 2 1/2 laps remaining, but managed to stay on his feet, swung both arms to build extra speed, and breezed across the line with plenty of time to spare in 12 minutes, 30.74 seconds.

For a year, van der Poel didn’t even compete on the ice in order to build up his aerobic capacity instead. He did that mainly by spending 33 hours a week on his road bike pedaling at power levels that aren’t far removed from pro cyclists. (Most speedskaters are would-be cyclists in Lycra disguise, anyway.)

Van der Poel also took gold in the 5,000-meter event earlier this week. One year ago, he won the world championship in that distance, as well as the 10,000-meter race.