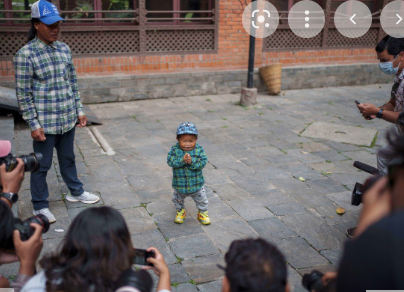 A Nepalese man has set the record for the world’s shortest living male teenager at a height of 73.43cm (2ft 4.9in).

Dor Bahadur Khapangi, 18, was given a Guinness World Records certificate in Kathmandu on Monday, according to local media reports.

Pictures show him posing alongside his brother Nara Bahadur Khapangi, who carried him to the award ceremony, and CEO of Nepal Tourism Board, Dhananjay Regmi.

He was also seen walking with his young niece Om Kumari Pulami Magar ahead of the event, which was held by the country’s national tourism organization. Photographers and reporters were later spotted crowding around to take a snap of him posing atop a ledge.

Previously, Jyoti Amge from India was named the world’s shortest living teenager at 61.95cm (2ft) in 2009.

She has since been confirmed as the world’s shortest living female, measuring 62.8cm (2ft 0.72in) on her 18th birthday in 2011, and has retained the record for over a decade.

Jyoti once met with Khagendra Thapa Magar, from Nepal, who was named the world’s shortest male teenager in 2010.

She said at the time: “When I met the shortest man in the world and got to know him, I felt very happy.

“I felt more included and more satisfied that there is somebody like me too.”

Khagendra became the world’s shortest living male before sadly passing away at the age of 27 in 2020.

In December last year, an 18-year-old American was given the Guinness World Record title of the shortest non-mobile woman in the world, standing at just 2ft 4inches tall.

Wildine Aumoithe, from Miami, Florida, has the rarest form of dwarfism, known as SADDAN dysplasia, and her parents were told that she wouldn’t survive 24 hours after she was born.

According to mirror.co.uk. Source of photo: internet