SATU FLNG is a floating liquid natural gas terminal that is currently located in the Kebagangan cluster field, offshore Sabah, Malaysia. It is also known as PFLNG SATU. The PFLNG SATU is designed to operate at water depths of up to 200 meters with a production capacity of 1.2 million tons of LNG per annum. Currently, PETRONAS is the only global energy company in the world that owns and operates two FLNG facilities. 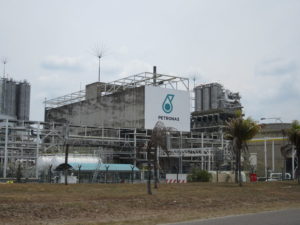 The terminal is located in the Kebabangan (KBB) cluster field, offshore Sabah, Malaysia.

Satu FLNG was originally moored in the Kanowit field offshore from Sarawak, Malaysia, and was commissioned in 2016. It is the world’s first floating LNG vessel. The vessel set sail from the Daewoo Shipbuilding & Marine Engineering (DSME) shipyard at Okpo to its final destination in Malaysia in May of 2016. In March 2019 Petronas announced that it had relocated the vessel to the Kebabangan (KBB) cluster field, offshore Sabah, Malaysia.

According to Wiki; petronas