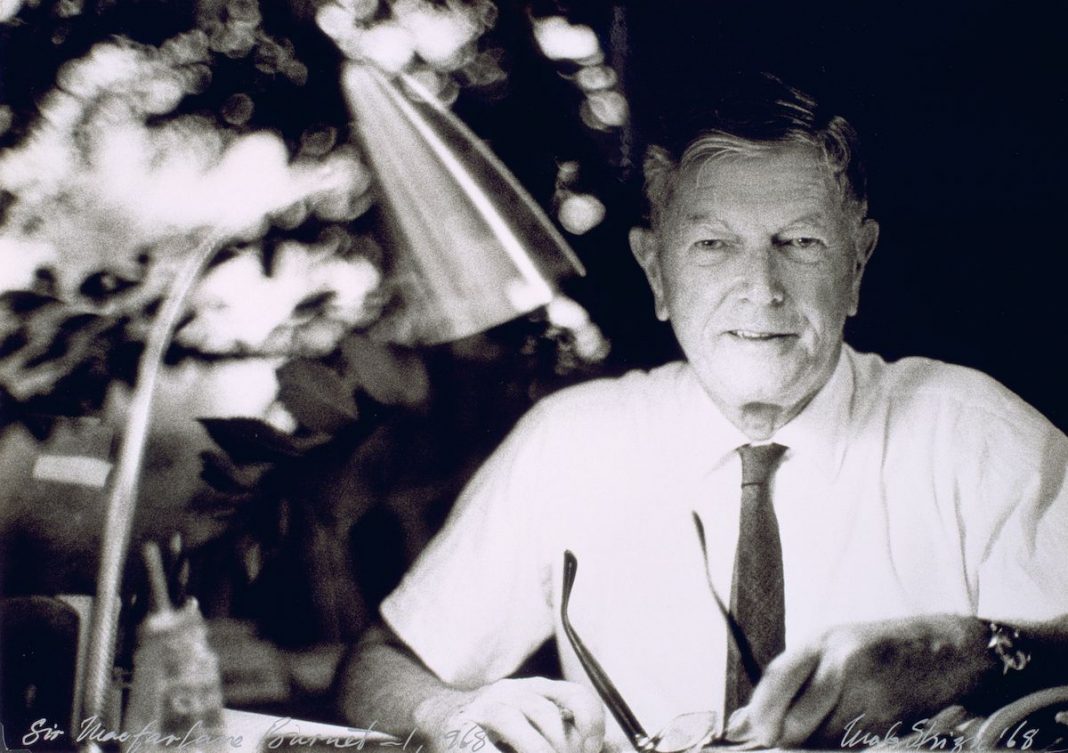 Frank Macfarlane Burnet, (3 September 1899 – 31 August 1985), usually known as Macfarlane or Mac Burnet, was an Australian virologist best known for his contributions to immunology. He was educated at the Victoria State Schools and at Geelong College, completing his medical course at the University of Melbourne, where he graduated M.B., B.S., in 1922, and M.D., in 1923. Burnet’s major achievements in microbiology included discovering the causative agents of Q-fever and psittacosis; developing assays for the isolation, culture and detection of influenza virus; describing the recombination of influenza strains; demonstrating that the myxomatosis virus does not cause disease in humans. Burnet did much other important work on certain aspects of the prevention of virus infections and on important biological aspects of virus growth inside the cells in which they can live. He found that the filamentous forms of some viruses (e.g. those of myxoviruses such as those which cause influenza, mumps, fowl plague, and Newcastle disease) can be ruptured by suspending them in water, and suggested that their infectivity is limited to their tips, so that these filamentous forms can, as later work showed, be regarded as having an infective «warhead» composed of nucleic acid and a long tail composed of non-infective viral haemagglutinin. He won a Nobel Prize in 1960 for predicting acquired immune tolerance and was best known for developing the theory of clonal selection. Our immune system protects us against attacks by microorganisms and rejects foreign tissue. Part of our immunity has a hereditary basis, but part of it is acquired and is not present in the fetus. In 1949 Macfarlane Burnet theorized that the ability to distinguish between one’s own and foreign tissue is not hereditary but is acquired during the fetus stage. The theory was substantiated when Peter Medawar succeeded in performing transplants of tissue between different mouse fetuses. The results had significance for organ transplants.